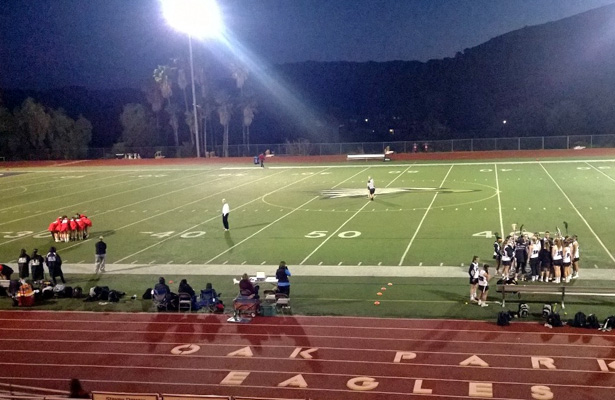 In a game both teams approached as a potential playoff preview and opportunity to make an early-season statement, the Oak Park girls outlasted perennial Orange County power Los Alamitos 13-11 on Friday.

Los Alamitos won six consecutive US Lacrosse Southern Section title from 2009-2014, but Oak Park now has beaten the Griffins by the same score in each of the last two seasons.

Fittingly, the game had something of a playoff atmosphere, with the stands at Oak Park HS packed with fans for both sides, and the fans were enthusiastic to say the least.

And to illustrate how evenly these teams played, the game featured four lead changes, and in the second half, neither team led by more than one until about three minutes remained. Overall, the Eagles made 13 of 20 shots to the Griffins’ 11 of 20, and the Eagles won 12 draws to the Griffins’ 13.

Los Al opened the game with early goals by Rachel Drukker, who would finish with three goals, and Sophia Schade, who scored four, and the “we are Los Al” chants were rocking the stadium.

But a 6-0 Oak Park run switched the momentum and the noise to the Oak Park side. Ania Brown (3g), Morgan Shorts (3g) and Julia Gilliam (3g) each scored, and at 6-2 the Eagles were poised to run away with it.

But Los AL dug in and battled back. Schade tallied three more goals during a 5-1 run by the Griffins, and the teams entered the half tied 7-7.

Los Al carried the momentum of that run into the second half, taking the lead for the first time since the four-minute mark of the first half at 8-7. Once again, though, the Eagles answered, as Shayne Costello scored twice to put Oak Park back in front 9-8.

After Los AL’s Kennedi Cantrell, tied it 9-9 with her second goal of the half, the game settled down a bit, and the defenses took over for both teams. Oak Park’s defense, led by Emma Barrow, Rachel Pham and Lauren Welin, limited the the Griffins to four second-half goals.

With the defense keeping Los Al under wraps, the Eagles were able to work the ball around and tack on goals from Isabelle Campbell and Costello’s third of the half to make forge an 11-9 lead. Los Al closed the gap to 11-10, but Brown and Gilliam each scored their third goals of the game, Gilliam’s with three minutes remaining, to slam the door.

The Eagles were led by Gilliam (3g, 1a) Costello (3g, 1a), Brown (3g), Shorts (2g) and Barrow (1g) and Campbell (1g). The defense was anchored by goalies Megan Sheehan and Alexis Robinson, with strong defensive play by Pham, Welin and Harper Wayne.