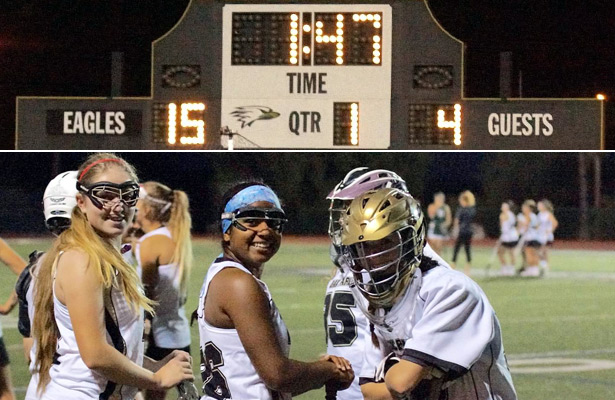 The Oak Park Eagles opened the 2016 season with a dominating performance against the Regents of La Reina on Monday, winning 15-4. From the opening draw, it was all Eagles, who jumped out to a quick 3-0 lead and led 11-1 at halftime.

The Eagles quickly added to their lead just 15 seconds into the second half to make it 12-1, and with a running clock, they were able to empty their bench and get everyone into the game. If winning draws is a formula for success, the Eagles were spot on, grabbing an impressive 70 percent, led by senior Morgan Shorts with seven draw-controls.

Offensively, Oak Park was led by seniors Ania Brown (4g, 1a), Julia Gilliam (3g, 2a) and Shorts (3g, 2a,), along with sophomore Yael Kauffman (1g, 2a) and freshman Kathleen Kaschalk (1g, 1a). All told the Eagles had 10 players tally a point in the game. The defense was anchored by goalies Meggie Sheehan and Alexis Robinson and defenders Rachel Pham and Emma Barrow.

Next up for the Eagles is the Rose Bowl Jamboree on Saturday in Pasadena, where they open with Corona Del Mar in Game 1. The Regents next face Crescenta Valley at home Wednesday.