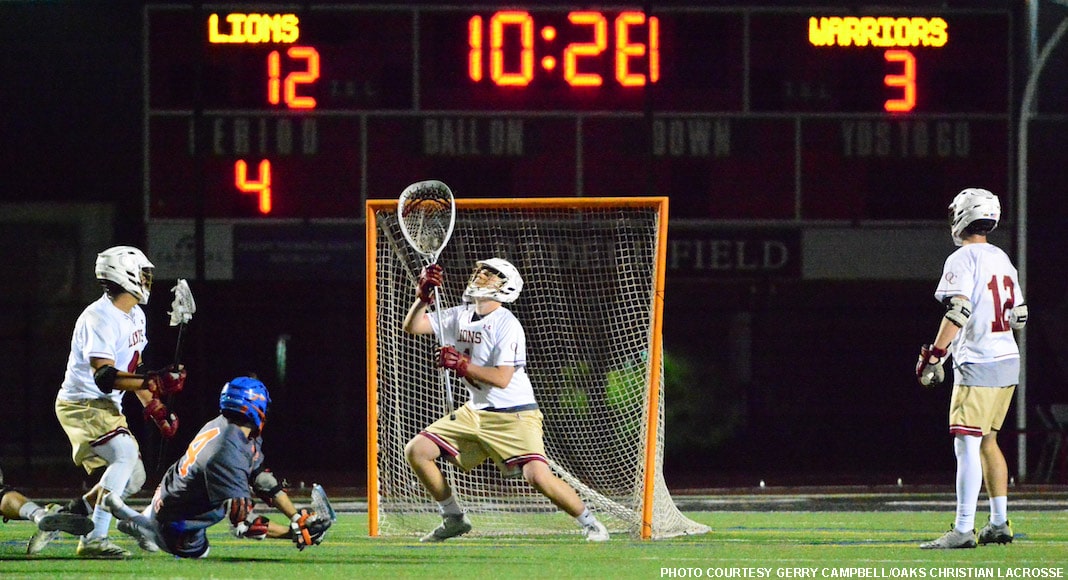 Oaks Christian limited high-scoring and sixth-ranked Westlake to only three goals in the first three quarters Friday in a 15-8 victory that secured second-place in the Marmonte League for the No. 8 Lions (13-5, 8-2).

Westlake too a 1-0 lead to open the game, but the Rogers brothers each scored two and Spaeth one to put Oaks ahead 5-1 heading to the second quarter. Another 5-1 outburst made it 10-2 at halftime, and the Lions extended their lead 12-2 in the third before the Warriors scored again.

The Warriors finally came alive with five goals in the fourth quarter but couldn’t close the deficit. Westlake finished its season with back-to-back road losses to Agoura and Oaks Christian in which the Warriors were held to single-digit scoring.

The Oaks Christian defense deserves much of the credit for Friday’s win, as goalie Vils and defender Redell anchored a stalwart effort. Face-off middie Jake Herren ensure the Lions had plenty of possession, and sophomore defender Tyler Akerley deserves mention, as well.

Wednesday, the Lions put themselves in position to clinch second place in the Marmonte League by dispatching No. 14 Newbury Park 17-8. Cade Rogers and Cort Rogers each had four goals and three assists in that one, and Campbell and Spaeth each had three goals and two assists. Oaks jumped out to a 7-2 lead after one quarter and led 9-3 at halftime.