Nuts for Lacrosse, Nuts for Animals and Nuts for … Nuts 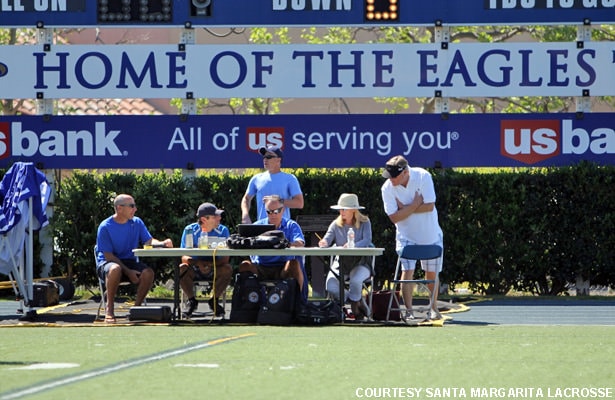 If the scorer’s table at Santa Margarita Catholic lacrosse games appears a bit more crowded than at other venues, blame it on BobbySue’s Nuts.

The snack, which was created by Maryland alum Barb Kobren, is proudly served at the Eagles’ scorer’s table thanks to Bob “Doc” Dochterman, a Santa Margarita parent and lacrosse supporter with a tie to the company. Logan Dochterman, Doc’s son, is a senior midfielder and captain for the Eagles.

That’s at least two lacrosse connections for the New York-based company — Kobren’s Terrapins and the Dochterman’s Eagles. The second one might help explain any crowding around the scorer’s table.

“Doc” Dochterman took some time recently to tell us a little more about the company:

BobbySue’s Nuts are served at Yankee Stadium. As far as sports connections go, is there a bigger stage?

“No bigger. They’re available in the Legends luxury suites at the Stadium. They’re also available at the bar in the new Freedom Tower (World Trade Center) in NYC.”

Where can we find BobbySue’s Nuts locally?

“Whole Foods and Nordstrom eBars are the two local outlets at this point, with more to come. We serve them at the every SM home game — at the scorer’s table. They’re available online as well.”

How did BobbySue’s Nuts get from Westchester County to Southern California?

“I’m lucky I guess. I was introduced to BobbySue’s via a close friend. Loved the product and the people. Decided to invest in the business two years ago. I also helped out as CMO for a period of time. Startups are a fantastic opportunity and one I enjoy helping.”

Is the apostrophe in BobbySue’s Nuts a possessive (they’re HER nuts) or a contraction (she IS nuts)?

“The logo suggests the latter. That’s funny. Likely a bit of both. She’s nuts about her nuts, for sure. The recipe is an old family one. Barb actually started the company to raise money for the SPCA. She’s an animal nut (that word again) and wants to give back by supporting animal shelters. We donate a portion of our net profits to the SPCA of Westchester Co, NY. We hope to eventually go nationwide with the effort.