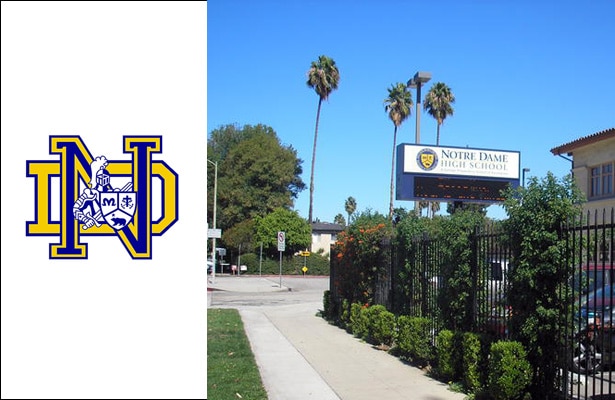 Notre Dame HS of Sherman Oaks is seeking a head boys lacrosse coach with plans to field a JV team this spring and expand to compete at the varsity level in 2017.

The Knights have long been rumored to be considering adding lacrosse, but Athletic Director Kevin Rooney said strong interest from the student body made the difference this year.

“We didn’t really have a serious push until this year,” Rooney said. “Years ago, we actually tried it as a club sport, but it kind of fizzled. This year, the push from the students was strong. We had something like 40 boys and 25 girls attend a meeting to express interest.”

He already is working on scheduling games for the new JV team, but it’s a bit of a challenge.

“I’m not sure how many games we’ll get, both because we’re only JV and because were starting so late,” he said, “but the goal is to get things started.”

Rooney said he still is not sure if the school will be able to offer a girls program this year or have to wait until next year.

From the job posting on LaxPower:

This is a great coaching opportunity at a highly respected college prep school with a superior athletic history. The school seeks to hire a leader who has an elite lacrosse background, is passionate about the sport, is committed to developing players, and wants to be the backbone of a new program.

Notre Dame is a private, co-ed Catholic school with an enrollment of roughly 1,200 students. Located in Sherman Oaks, the school is less than 20 miles from all of its Mission League opponents — Harvard Westlake (two miles), Crespi (six miles), Loyola (13 miles), Chaminade (15 miles) and St. Francis (19 miles). All but Loyola are in the San Fernando Valley.