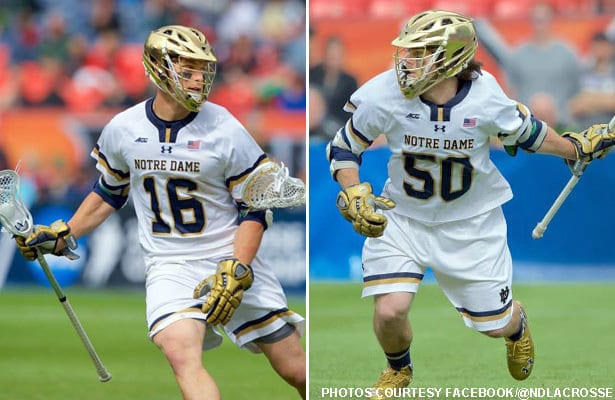 Notre Dame and Maryland return to Southern California in March for the Pacific Coast Shootout, so MaxLax has been digging in to these programs to bring you everything you need to know when you file into Orange Coast College to see them in person March 5.

Also on the roster is senior defender Edwin Glazener of The Bishop’s School in La Jolla. Read more about Glazener below, as we present five players to keep an eye on when the Fighting Irish take the field:

A finalist for the 2015 Tewaaraton Award as the nation’s top lacrosse player, Kavanagh is a two-time All-ACC selection who registered a team-high 52 points last season on 27 goals and 25 assists. He earned first-team All-America honors for the second time.

An imposing figure in the Irish midfield, the 6-foot-4, 220-pound Perkovic made an indelible mark in last year’s NCAA tournament semifinal loss to Denver. With the Irish trailing 7-4 and eight minutes to play in the game, Perkovic went on a tear, scoring five goals in the span of six minutes. The last of those pulled the Irish to within one at 10-9 with 2:03 left. Notre Dame eventually tied the game with nine seconds left, but Denver won in overtime, 11-10. Perkovic finished his sophomore season with 34 goal and seven assists. As a freshman in 2014, he started all 18 games for the Irish and had 28 goals and 5 assists.

Check out the video of Perkovic’s fourth-quarter barrage:

Landis, the 2015 ACC Defensive Player of the Year, anchored a Notre Dame defense that ranked ninth nationally in ground balls (33.07 per game), 12th in caused turnovers (7.80 per game) and 19th in scoring defense (9.33 goals allowed).

Coming off a sophomore season in which he started every game and collected 51 ground balls and forced 18 turnovers, Epple was named a second-team preseason All-American heading into his junior season. As a freshman, he appeared in all 18 games, starting the final seven.

After appearing in 16 games as a sophomore, Glazener started all 15 games as a junior last spring. He recorded 18 ground balls and 15 caused-turnovers while committing only one penalty. Glazener was a four-year letter winner at The Bishop’s School in La Jolla and earned All-America honors as a senior. He was a two-time conference player of the year, two-time all-San Diego and two-time captain for the Knights.