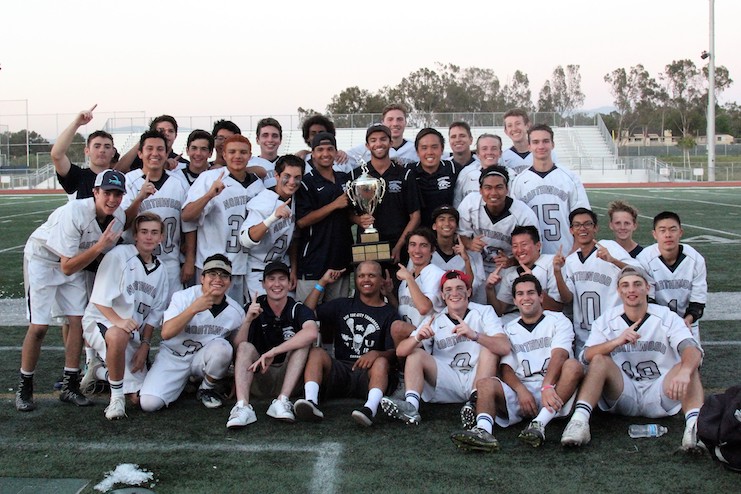 The Northwood Timberwolves captured their second straight city championship by winning the end-of-season Irvine ‘Own The City’ title on Saturday, defeating the Irvine Vaqueros 10-6 in the semifinals and rival Woodbridge Warriors 7-5 in the championship game.

The T-Wolves were led by their seniors in the tournament, as they were all season long. Against Irvine, senior attack Michael Bellas (3 goals, 1 assist), Ben Langdon (1 goal, 2 assists), and Vincent Li (2 goals) paced the offense, with senior midfielders Andrew Bauer (1 goal, 2 assists), Matt Sartanowicz (1 goal), and Abdullah Khalil (1 goal) also getting on the board. Freshman midfielder Isaac Nesbit completed the scoring with a goal of his own against the Vaqueros.

In the finals, all seven goals were scored by the senior attack trio: three each from Bellas and Langdon, with one from Li. Bellas and Bauer also added one assist each against the Warriors.

Bauer’s dominant performance at the face-off X also made a huge impact on the day, going for a combined 23-of-27 in the two games.

Bellas, who broke Northwood coach Kevin Rowen’s school record of 96 points in one season, finishes the year with 119 points on 86 goals and 33 assists. He was named 2017 ‘Own The City’ Overall Most Valuable Player.

Langdon, Own The City’s Offensive MVP recipient, wasn’t too far behind Bellas on the season, putting up 76 points on 63 goals and 13 assists.

The Defensive MVP award was given to Woodbridge’s junior goalie, James Nakano.

Despite Northwood’s staggering individual offensive outputs this season, the title game on Saturday was truly about the T-Wolves’ defensive effort.

“Going from our worst game of the season last time against Woodbridge, committing 15 penalties and allowing 17 goals, to only allowing five goals this time says a lot about our boys,” Coach Rowen said after the victory. “The way they responded in practice the whole week leading up to ‘Own The City’ was remarkable. Our renewed sense of discipline and the commitment to learn a new defensive scheme for both sixes and man-down — while being without two of our senior long poles — was vital to the win. I’m proud of the boys for coming together and sticking with the game plan all four quarters.”

Coach Rowen, a freshman on Northwood’s first ever CIF team in 2008 and now the head coach the last two seasons, has been part of all five city championships.

“It’s been an honor to be part of Northwood’s lacrosse program for six years in total as a player and coach, and it’s great for the growth of the game in the city of Irvine to have ‘Own The City’ to look forward to each season,” Rowen said. “Hopefully this is an event that the teams continue to hold for many years to come.”