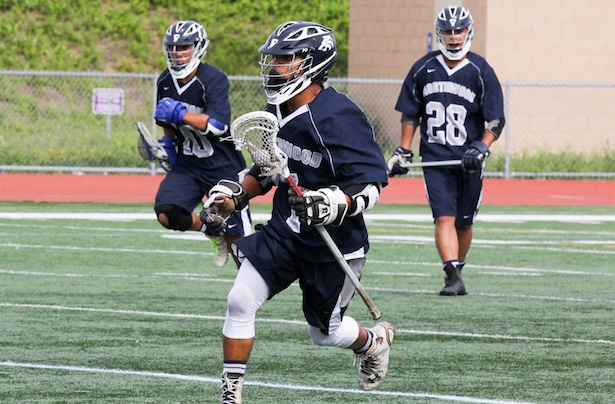 Karel Wiensz (pictured above) won 8 of 9 faceoffs and recovered four groundballs on Monday to earn the game ball while leading Northwood to a 12-2 victory over Sage Hill on Monday. The win keeps the Timberwolves (10-6; 7-1) one game behind Beckman in the Pacific Coast League race. If Northwood beats Beckman by eight goals or more on Thursday, they can win the league title and earn an automatic bid to the post season.

The Northwood defense shutdown Sage Hill from the outset, holding the Lightning to just eight shots on goal in the game, and the Timberwolves’ offense was hot from the start. After 5 goals in the first quarter and 4 in the second, good for a 9-2 halftime lead, Northwood cruised in the second half. Michael Bellas lead all scorers with six goals. Jason Venezia added four points (3g, 1a). Vincent Li (2a), Andrew Bauer (1a), Laith Alsayed (1g), Calvin Ta (1a), Gabriel Enciso (1g) and Alex Aviles (1g) completed the Northwood scoring.