No Surprises in Bottom Half of LA Bracket 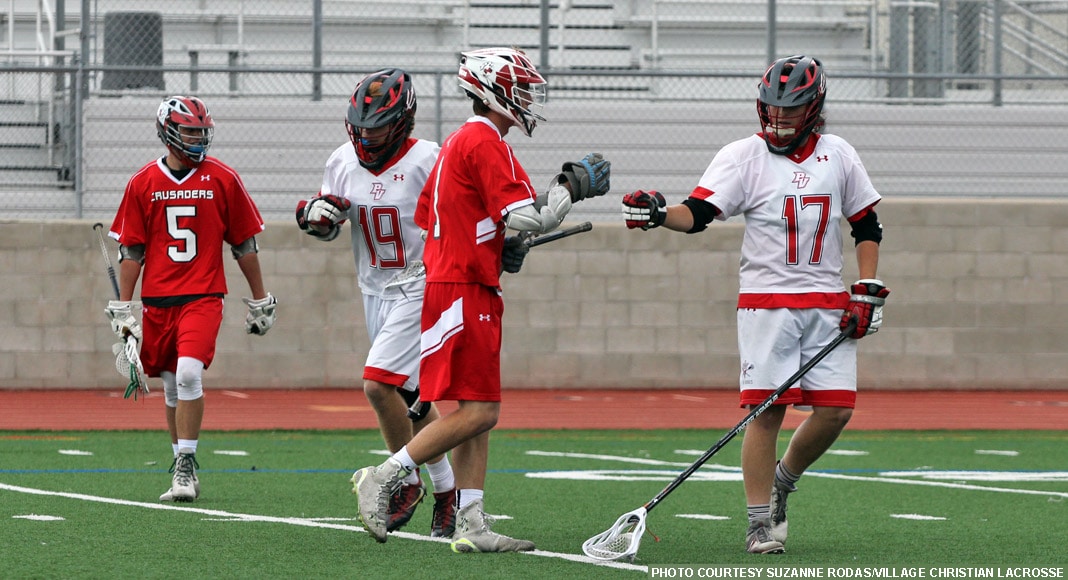 Much as in the top half of the US Lacrosse LA Postseason Championship Tournament bracket, all four higher seeds and home teams won their first-round games Tuesday to advance to Thursday’s quarterfinals.

Host Palos Verdes made short work of its first-round game with Village Christian, jumping out to an 8-1 lead in the first quarter and extending it to 16-1 by halftime. The final score of 21-3 brought the Crusaders’ surprising second CIF season to an end with a 12-3 record.

Palos Verdes earned a rematch with No. 7 Oaks Christian on Thursday. The Lions beat the Sea Kings 5-3 in early March, a result Palos Verdes certainly will want to avenge.

Seventh-seeded Oaks Christian was stellar at both ends of the field Tuesday, shutting out visiting Crespi in the first half en route to an 11-4 victory. Senior goalie James Vils stopped 12 Crespi shots to anchor the defensive effort.

Oaks Christian now will make its second trip of the season to Palos Verdes for a second-round game Thursday. Crespi finishes 9-10 for the season.

Wolverines Run Away From No. 14 Thousands Oaks in Second Half

Coming off a listless performance in a 14-2 loss to Loyola in the Mission League tournament final last week, third-seeded Harvard Westlake struggled early against the Lancers before pulling away for a decisive 10-3 victory.

The Wolverines (10-7) led only 3-2 at halftime against a Thousand Oaks team that had won three in a row down the stretch. But there would be no upset in this game, as Harvard Westlake dominated the second half against the Lancers (5-14).

Up next for the Wolverines is a rematch with No. 6 Oak Park on Thursday. Harvard Westlake throttled the Eagles 13-3 on March 15, but Oak Park won seven in a row and nine of its next 11 after that loss.

Holding visiting Sierra Canyon to one goal in each of the first two quarters, sixth-seeded Oak Park took a 7-2 halftime lead and cruised to a 12-5 first-round victory over the No. 11 Trailblazers (9-6).

Junior LSM Alistair Ong collected 10 ground balls to lead a strong defensive effort by the Eagles (12-6), who advance to a Thursday second-round game at Harvard Westlake.