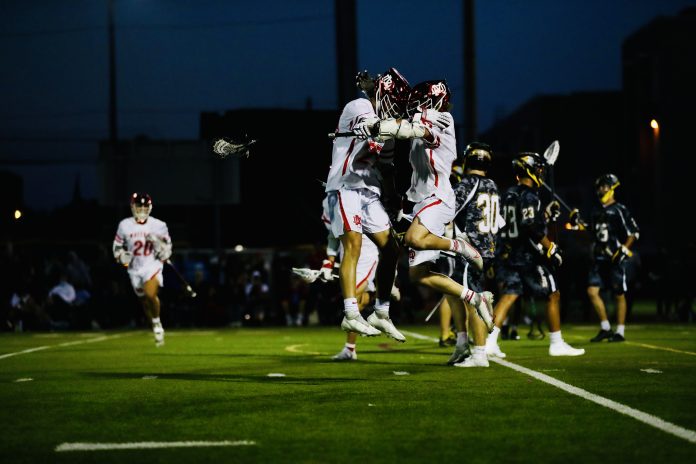 After getting off to a bit of a slow start, the Mater Dei Boys Lacrosse team asserted control over the game, steadily built a three goal lead for much of the second half and fended off Foothill in the final minutes to preserve a 9-7 victory.

Perhaps it is not a surprise that after six consecutive games where Mater Dei had outscored their opponents 109 – 7, the faster pace of play from the fleet-footed Foothill Knights caught the Monarchs a bit off guard.  But after falling to a 0-2 deficit in the early going, the Mater Dei team put their effort into a higher gear, pulling away from Foothill to bring their overall season record to 17-1.

Sophomore Triston Jewell led the way for the Monarch offense with 4 goals, coming up with deadly accurate shots after some slick dodges to repeatedly answer any of Foothill’s efforts to chip into the Monarchs’ lead.  Mater Dei also got a goal each from: Rowan Piani (Jr.), Evan Curry (So.), Lucas de la Paz (So.), Tommy Bethel (Sr.) and Cole Crisostomo (So.).

The Monarchs outshot the Knights 34-21 in the game, thanks in large part to the strong faceoff play of de la Paz, who continued his faceoff dominance this season, winning 84.2% of the game’s faceoffs (16-19) to give Mater Dei many additional scoring opportunities.

The Monarch defense was tested all game by the physical Foothill attack, but they were up to the challenge, holding the Knights to just 7 goals, thanks to Goalie Nick Colignon’s (Jr.) 10 saves and aggressive defensive checking from Andrew Crosby (Jr.).

The 17-1 Monarchs’ next match up is Wednesday night at St. John Bosco to conclude Mater Dei’s Trinity League play for the season.  The Monarchs secured their first Trinity League championship in program history with last Saturday’s win over Santa Margarita.