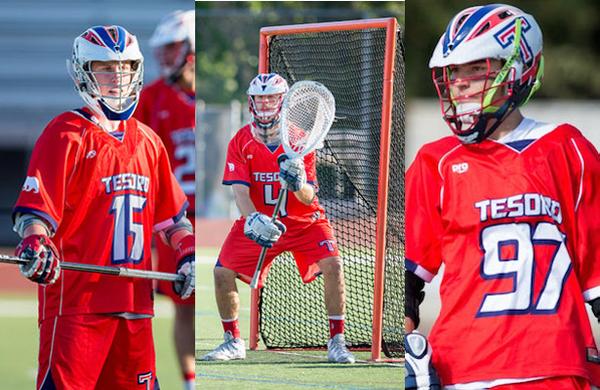 Tesoro High School is coming off an injury-plagued, topsy turvy season, which saw the Titans lose four of their last five regular season games.  After stumbling into the playoffs, the Titans came alive and upset Beckman in the first round.  Their 2014 season ended with a 10-6 loss in the second round to Corona del Mar.  The Titans finished the season 10-9.  A strong group of seniors give the Titans hope for a South Coast League crown and a longer stay in the playoffs this season.

Tesoro has always been a constant force in Orange County Lacrosse. They’re the type of team that plays a very brash and assaulting brand of lacrosse that can often intimidate the most confident of teams. They have spoiled many playoff hopes, and dashed dreams of championships many a time. In recent years, with Coach Adam Miner, the program has matured and is more focused on development and disciplined play.  One things opposing teams can count on is that the Titans will be Tesoro tough; playing hard and fast, and ready to run you off the field on game night.

Leadership this year will come from the Titan’s recently announced captains for the 2015 season. Gunner Garn, Blake Warner, and Cole Roberson look to lead the team towards success. All three players have earned respect through years of hard work and experience within the Tesoro system.

Garn (University of Michigan), despite being a very friendly guy, is an extremely intimidating force in net. He’s the goalie that teams will actually scout and include in their game plans.  Coaches will warn players that shooting on him isn’t easy and that shots need to be accurate and well selected. He is an athlete, playing years of competitive,hard-nosed Tesoro Football, and he uses this to his advantage in cage by making highly explosive movements to stop the ball. He is also an extremely intelligent player who can run a defense verbally as well as make smart plays on the clear. He is also a very calming presence, arguably his best trait. He is able to combine the skills, lacrosse IQ, and athleticism in a way that is very comforting for his defenseman. This no doubt brings the best out of the rest of the team.

Midfielder Blake Warner, younger brother of prolific lefty-attackman Chase Warner (currently playing at Colorado State), is a jack-of-all-trades. He has a unique combination of speed, skill, and athleticism that allows him to make a varied amount of plays to get points on the  board. He doesn’t fit into any one cookie cutter role, instead playing a smart game of lacrosse where he is able to improvise off of the defense’s movement; creating and capitalizing on many opportunities. He is also a scrapper. He won’t give up and will hustle until the final whistle to move his team’s chemistry along for the entirety of the game. Expect Warner to make plays that put points on the board, as well as plays between the lines that’ll make a huge difference in crunch time.

Cole Roberson is Tesoro’s marquee defenseman, earning everything he has through dedication and hard work. Roberson is a hustler, who focuses in on his role on the team and uses his extensive motor to achieve whatever is necessary for his team. Being a LSM, he is a do-it-all defenseman. He’ll cover guys anywhere on the field, snagging skip passes, making plays on the wing, and creating offense for his team. He does all this while going at 110 percent, never stopping until the final whistle has blown.

With his senior captains taking active leadership roles, Coach Adam Miner has time to welcome and develop his largest freshman class to date.  Twenty five new players have entered the Tesoro system and are hungry to follow the examples of the upperclassmen, as well as forge their own identities in the Titan tradition. A few of these new faces are knocking at the door, playing well enough to be considered for varsity. Coach Miner has never called up a freshman since his time at Tesoro, so this pre-season will determine if any of his underclassman can make the large jump from middle school to varsity. Even if none make the leap, the large class will no doubt be making impacts throughout their four years within the program.

Miner is also assisted by an established offensive genius on the sidelines. Nick Tintle was a prolific and storied goal scorer at the University of North Carolina. Since graduating, Tintle has made several strides in the lacrosse community. He became an LXM Pro for awhile, and has begun a lacrosse specific training company that seeks to improve both player’s athleticism and skills in the game. However, when springs rolls around, Tintle is completely committed to refining and dominating with Tesoro’s offense.

Tesoro began instituting a new program philosophy last year that the coaching staff hopes will improve with this season. Tesoro will be playing for “Each Other”, through all aspects of their team. That means playing and hustling for each other; focusing on every play and bringing everything you have in the name of the rest of the team. This will also carry over to the way the team gels in their Xs and Os. Instead of relying on a few impact players, Tesoro looks to play a team game on all parts of the field. Initially this will be hard, as players need to check their egos at the door and move the ball unselfishly, all in the pursuit of playing for and with each other.

Tesoro will foster this philosophy through a tough initial five game schedule, and aims do something the program has never done before: reach the final four. Getting to this spot would be a very big milestone for the program, and will indicate that the team and program has moved towards it’s “Each Other” philosophy. Once there, the team will take the playoffs one game at a time, trying to play their game.