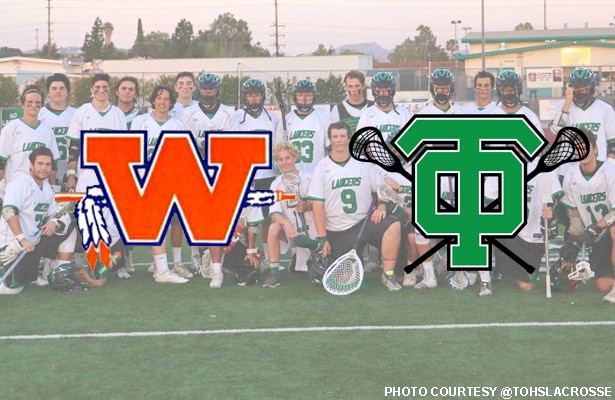 The back-and-forth game was tied six times after the ninth-ranked Lancers took an early 4-0 lead. But after the No. 4 Warriors rallied to tie it 4-4 in the closing seconds of the first period, neither team led by more than two the rest of the way. In fact, Westlake led only once in the game, after Duke Cohen scored two quick goals to open the fourth and put the Warriors in front 11-10.

But T.O.’s Spencer Whinery scored unassisted three minutes later to again even the score, 11-11, and the Lancers scored again a minute later to lead 12-11. Whinery added another goal with 3:35 left that gave Thousand Oaks a 13-11 lead, enough to survive one more goal from Westlake’s Cohen, who finished with five goals and three assists.

Thousand Oaks, on the other hand, had lost three in a row last week and appeared to be reeling. Two of the losses were uncharacteristically one-sided — 16-3 at No. 1 Loyola and 16-5 at No. 8 Newbury Park. Wednesday’s win might have signaled a turn-around, though, with five games left in the regular season.