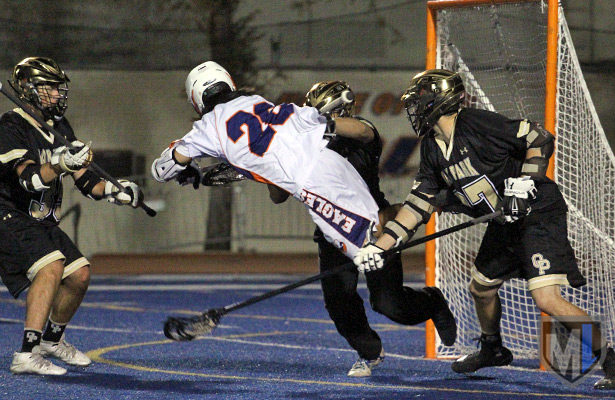 Chaminade cleared a significant hurdle Tuesday in its climb back into the upper division of Los Angeles high school lacrosse teams, posting a 12-7 victory over visiting Oak Park — Chaminade’s first win over an established, perennial playoff contender since 2010.

That year, the Eagles beat Oak Park 8-2 in the season opener, went 12-2 overall and won the Mission League. But the Eagles went 4-40 over the next three seasons, changing coaches twice. Things started to change under coach Steve Lane, now in his fourth season, who led Chaminade (5-2) to a playoff berth last season and has the Eagles in the Top 10 at No. 9 this season.

Tuesday, Chaminade got five goals from senior attack Mitch Kalkwarf, three from senior middie Ryan Oaks and two from sophomore A/M Max Kim (pictured above on an unsuccessful dive along the crease line) in posting its most significant win in six seasons.

Granted, it came against a young Oak Park squad — the Eagles (2-6) list only four seniors on their roster — that lost Division I commits Brendan Egan and Evan Egan to transfer in January. Nevertheless, Oak Park was ranked No. 13 in the most recent coaches poll, was the No. 8 seed in the playoffs last season and is always among the best-coached teams in the area.

So Chaminade validated, to some degree, it’s Top 10 ranking Tuesday. The Eagles scored first on Kim’s solo dodge from X less than a minute into the game, led 5-3 at halftime after three consecutive goals from Kalkwarf in a two-minute span in the second period and stretched the lead to 9-5 entering the fourth quarter. The margin reached 11-5 on Kalkwarf’s fifth goal with 9:34 to play.

Senior middie Mark Galanti kept the ball in the hands of Chaminade’s offense all night, winning 17 of 22 face offs, and senior goalie Peter Manfredonia turned away numerous Oak Park scoring opportunities with solid work in the cage. Freshman LSM Will Kolbe and sophomore middie Mac Griffin also had goals for the Eagles.