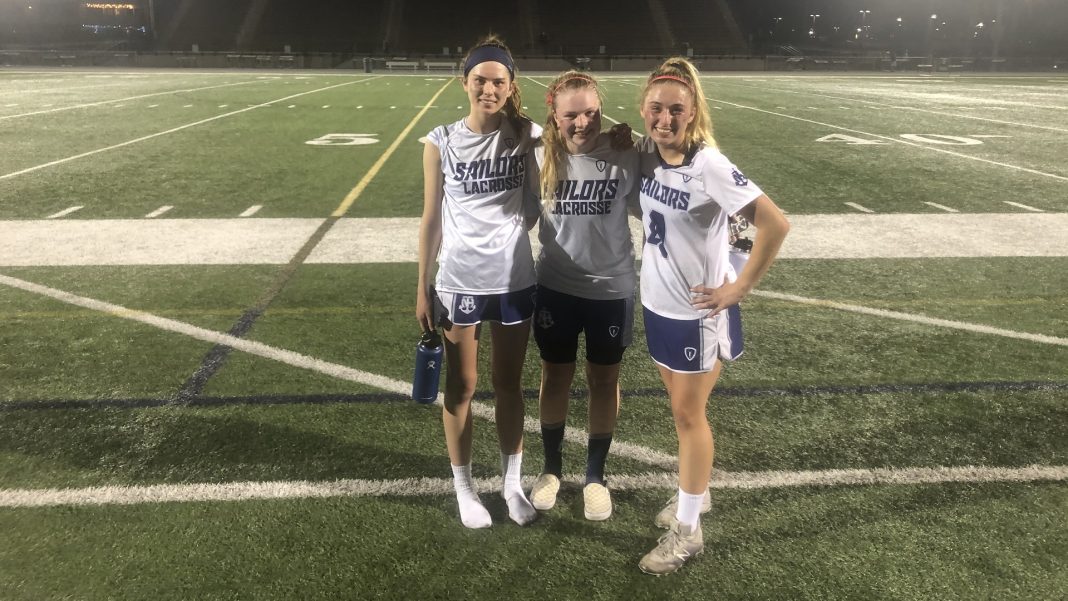 Olivia Gritzmacher (pictured left) scored seven goals to help the Newport Harbor girls lacrosse team edge Sunset League rival Edison 13-12 on Thursday at Newport Harbor High School. Joelle Rothbard (pictured right) had two goals including the game winner with 2:59 in regulation. The Sailors could not have captured the W without every single one of Lucy Valdes’ (pictured middle) 10 saves.

The Sailors and Chargers are now tied for first place in the Sunset League at the halfway point of league play.

“This win is huge against Edison. We knew as a team coming into the game it wasn’t going to be easy and knew it would be competitive. We came out confident, never gave up, and played as a team,” Sailors coach Brooke Martini said.

Ali Bryant led the Chargers with five goals while Blakely Malpass added four goals. Melanie Wieland and Sydney Hoggard chipped in two and one goal respectively for Edison, which got one save from Cailien Gorsuch.

After the Sailors led 2-1 in the early stages, Edison rattled off three straight goals to take a 4-2 lead at the 14:21 mark. Newport Harbor tied the game at 4-4 with goals from Gritzmacher and Farmer, but with the game tied at 5-5, the Chargers got goals from Bryant and Hoggard to put them up 7-5 at the 3:36 mark.

The Sailors didn’t let that deter them, as Gritzmacher’s goal 24 seconds after Edison’s previous goals and Rothbard’s goal at the 2:28 mark tied the game at 7-7. With 1:25 left, Hoggard’s goal gave the Chargers an 8-7 halftime lead.

Edison kept a one goal advantage on Newport Harbor for the first 8:35, as every time Newport Harbor tried to creep its way back in, the Chargers answered with a goal. They began to distance themselves as back-to-back goals from Bryant put Edison up 12-9 at the 14:06 mark, forcing Martini into a Sailors time out.

After the Chargers’ 12th goal, they were shut out the rest of the way, as Valdes stepped up her play in the cage the defense made sure there were no free offensive possessions. Jones scored goals at the 10:32 and 8:34 mark to cut Edison’s lead down to 12-11 and Gritzmacher’s seventh goal, tied the game at 12-12 at the 7:01 mark.

“She was on fire tonight. She continues to be a huge threat every game,” Martini said of Gritzmacher.

It took a little more than four minutes for the next goal to be scored, but Rothbard making a cutting move and scoring the goal gave Newport Harbor its first lead of the night at 13-12. The Sailors won the ensuing draw and made sure to drain the clock, but not stall, as eventually, they stormed the field knowing that they pulled off their biggest win of the season.

“Tonight, we came out wanting to win and we came out to play. We put in 110% effort tonight. Against Los Al, we came out flat footed and didn’t play our game,” Martini said.

The two teams will meet again on Tuesday May 18 at Edison High School.

“I think the second half of league will be tough. I love how competitive our league it because it comes down to who wants it more,” Martini said.

Edison (7-4) will take a break from league play, but returns to the field on Saturday at Foothill in a battle of two top five teams in the CIF-SS girls lacrosse rankings at 1:30 p.m. The Chargers resume league play on Thursday at Corona Del Mar at 3 p.m.