No. 7 Crespi Stuns No. 2 Loyola on Dixon's OT Goal

Crespi’s Alex Dixon dodged righty from X, slipped inside the defense and stuffed a shot past Loyola goalie Joe Theuer in overtime Thursday, triggering both celebration and complaint as the No. 7 Celts claimed a stunning 9-8 quarterfinal win over the No. 2 Cubs.

Crespi (12-6) celebrated its third consecutive trip to the L.A. semifinals after its first win in three tries this season against Loyola (15-4).

The Cubs protested the game-winning goal, claiming Dixon dove into the crease. Loyola coaches said that the officials acknowledged that Dixon had gone into the crease, but they ruled it came after the ball was in the net, and the goal was good.

The fact the game reached overtime in the first place was a testament to the Celts’ defense. They previously had lost to Loyola 15-8 and 13-9, but they dropped into a zone defense Thursday that had the Cubs baffled. Loyola’s 6-on-6 offense produced only one goal. The Cubs scored twice man-up, twice in transition and three times in unsettled situations after ground-ball scrums had scrambled the Crespi defense.

Loyola’s 6-on-6 offense produced long possessions and a lot of shots, but not many on cage. Crespi goalie Nick Enos was credited with nine saves, eight in the first half. Nine save, plus eight Loyola goals equals 17 shots on goal out of 35 total shots for the Cubs. In their last meeting with Crespi, the Cubs took 37 shots and put 24 of them on cage, scoring 13.

Still, that was enough to keep Loyola in the lead much of the game. The Cubs led 2-1 after one quarter, 5-4 at halftime and 6-5 entering the fourth quarter. Junior Sean Smith and sophomore Ryder Mora each scored twice for Loyola, and Harrison Mac, Jonathan Partamian, J.P. Hatch and Henry Hasenberg each scored once. But the Cubs never led by more than two, and Crespi found as many opportunistic scoring chances as Loyola did to keep it close.

In fact, Dixon, who finished with five goals and two assists, rallied the Celts almost single-handedly after Loyola took an 8-6 lead with 6:26 to play in regulation on a man-up goal from Mora.

Dixon scooped up a groundball at midfield on a failed Loyola clear and took it the hole himself to make it 8-7 with 4:40 left, his second such end-to-end foray of the fourth quarter. A minute later, he did it a third time but fed Sean Friedman for the finish to tie the game 8-8 with 3:31 left.

Loyola held possession for most of the remainder of regulation but couldn’t score. After a time out with 24 seconds left, the Cubs managed to get off three shots as the clock ran down, but none of them were on cage. 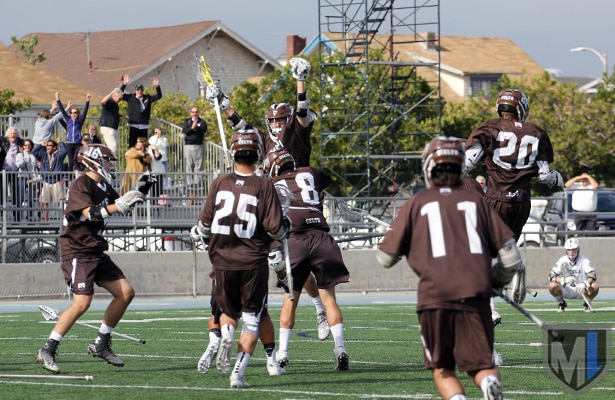 Dixon won the opening face to start overtime, and after a time out the Celts lost possession when Seth Park‘s shot hit the post and Loyola’s Theuer won the back-up chase. But the Cubs again turned it over on the clear — this time on an interference call for a moving screen. Loyola never had on offensive possession in overtime.

The rest was up to Dixon.

Friedman had two assists to go with his game-tying goal in regulation, and Park (1g, 1a) and Jack Doyle (2g) also scored.

Last year, Crespi beat Mission League rival Harvard Westlake 9-7 in the quarterfinals after having split with the Wolverines in the regular season, winning 14-13 and losing 11-10. They went from allowing 13 goals to 11 to only seven the third time the teams met. This year, the Celts went from allowing 15 and 13 in two losses to Loyola, to holding the Cubs to eight in an overtime win.

Crespi and No. 1 seed Palos Verdes are both making their third consecutive trip to the L.A. semifinals. Crespi lost at Oak Park 10-9 in the semis last year after having lost to the Eagles 9-6 in the regular season. This year, Crespi lost to Thousand Oaks 13-10 in the season opener and will head into Saturday’s rematch looking to turn that around.