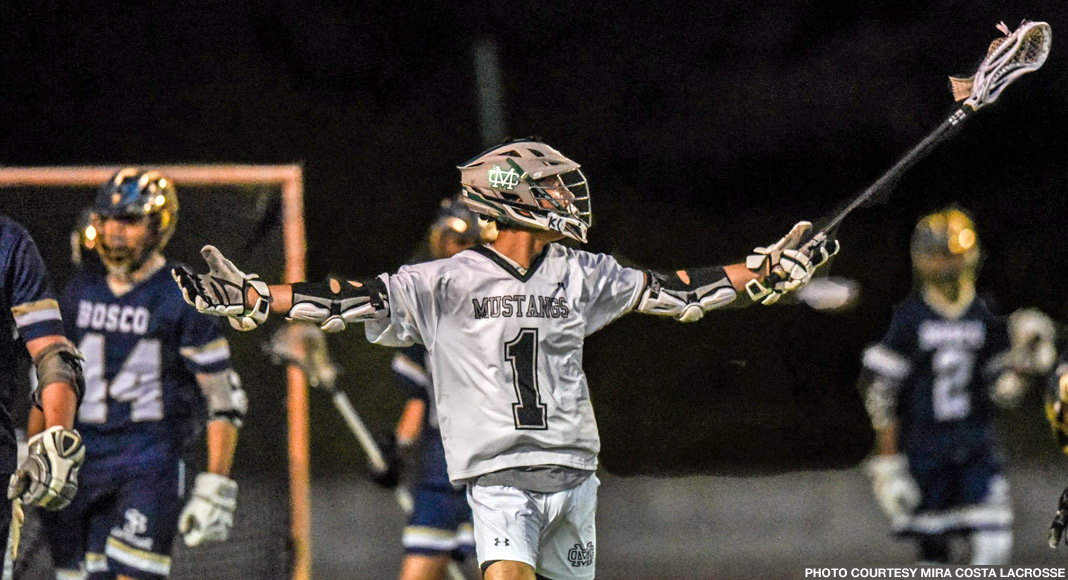 Bosco, which lost for only the second time this season (both to Mira Costa), had rallied from a 10-8 deficit with two fourth-quarter goals to force the overtime.

In fact, the Braves (15-2) outscored the Mustangs 4-1 over the final 16 minutes of regulation, erasing a three-goal lead Mira Costa built with six-goal outburst early in the third period.

But the Mira Costa defense stood up in the two overtime periods. Anchored by sophomore goalie Kieran Barksdale (16 saves, including 3 in overtime) and long-pole defenders Cole Garvey and Derek Svensson, Mustangs coach Aaron Karsh said his team got an invaluable boost from sophomore midfielder Nik Butler (3g, 1a). Karsh said Butler was outstanding in the defensive midfielder and was unstoppable in the clearing game, coming up with three key clears in the overtime periods.

With the defense holding Bosco at bay and returning the ball to the offense, Read finally capitalized. After swinging the ball through X and back around to his wing, Read fired a step-down into the upper right corner for the victory.

The 2OT winner! Very proud of these young men who have worked so hard for this moment! Hats off to a great St.John Bosco team who played a heck of a game in this thriller! Up next #2 Loyola on Thursday. . . . @mustangmorningnews @mbx.foundation @miracosta_asb @miracostalax @thebeachreporter @dailybreezenews @scprepinsiderss @latimes @ktla5news @maxlaxla

Information for this report was contributed by Mira Costa Lacrosse.