No. 7 Chaminade Knocks Off No. 3 Harvard Westlake 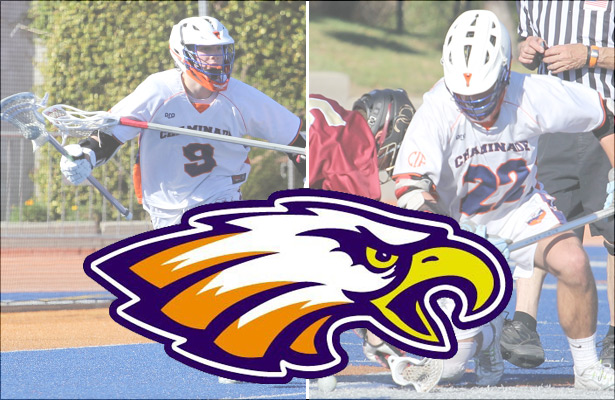 The Chaminade Eagles, ranked No. 7 in the latest coaches poll, posted the most significant win of their recent resurgence Tuesday, riding a dominant performance at the face-off dot from senior Mark Galanti and a surprising effort in goal from emergency keeper Andy Dyer to a 14-9 Mission League win over No. 3 Harvard Westlake.

“This was a big one,” Eagles coach Steve Lane said. “I could look at every kid that stepped on the field tonight and easily find something they all did great. A true team effort.”

The Eagles (10-4, 3-2) beat the Wolverines for the first time in 11 games dating to 2010. Earlier this season they broke a similar streak against Crespi. Chaminade now has won 10 games in a season for the first time since 2010 and has a chance to finish tied for second in the Mission League.

Three of Chaminade’s four losses have come against teams ranked No. 2 (Loyola), No. 3 (Harvard Westlake) and No. 4 (Westlake) in the coaches poll. But this is the first win for the Eagles against a team ranked higher than No. 11.

And make no mistake: The Eagles won this game in all phases.

The Eagles led 5-2 after one quarter and 7-4 at halftime. The Wolverines, who beat Chaminade 7-3 the first time they played this season, rallied to within 8-7 during the third quarter, but the Eagles ripped off five unanswered goals and led 13-7 with six minutes to play.

Galanti, who will play next year at California, dominated the face-off dot, winning 21 of 26, mostly against Princeton-bound Philip Thompson. That gave Chaminade an edge in possession, and the offense cashed it in. Senior Mitch Kalkwarf scored five goals; sophomore Mac Griffin had four; senior Ryan Oaks scored three; senior Charlie Griffin, in his first game back from injury, scored one; and sophomore Max Kim scored one.

At the other end, Lane turned to sophomore Dyer to fill in at goalie for senior Peter Manfredonia, who has been nursing a sore knee. Last year, Lane called up his JV goalie to fill in for an injured Manfredonia against Harvard Westlake, and the Wolverines poured in 26 goals against the overmatched keeper.

Tuesday, Lane went a different direction. Dyer, who has played primarily attack but came into the season as a potential backup goalie, stopped 12 Wolverines shots. Harvard Westlake had been averaging nearly 14 goals per game over the last few weeks before being held to six by Loyola and now nine by Chaminade.

Much of the credit for that goes to Dyer, but Lane also cited the play of starting defenders Cole Millard and Thomas Nelson and backups Liam Gilhuly and Will Kolbe.

“Everyone who stepped on the field today made an impact,” Lane said. “With two key starters out, the boys rallied, and this was the team win we needed.”

Chaminade has three league games remaining — at home against St. Francis and Crespi and at Loyola to finish the season. Victories in two of them likely will leave the Eagles tied with Harvard Westlake for second place at 5-3, behind Loyola (13-3, 7-0). Harvard Westlake (9-4, 3-3) faces No. 13 Oak Park on Saturday in a nonleague game, then finishes with home league games against St. Francis and Crespi.