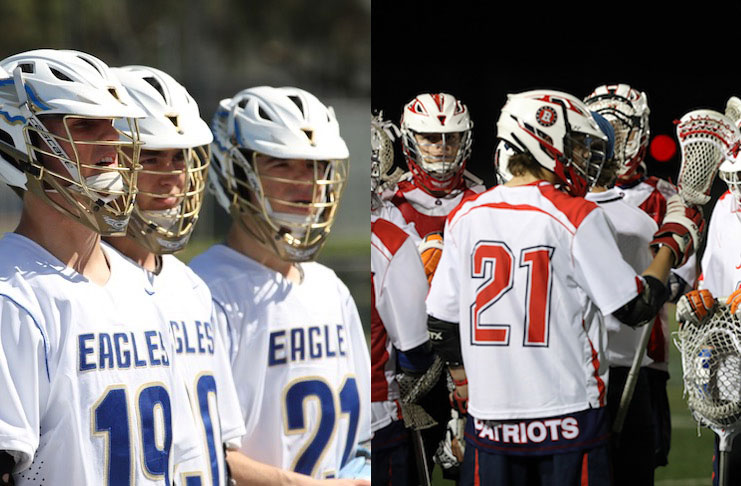 Things to Know About Beckman:
The Patriots clinched their fifth consecutive Pacific Coast League championship and extended their league winning streak to 50 games.  Beckman has not lost a PCL game since 2012.  Beckman defeated No. 10 Mater Dei, 9-6 on March 9.  All four losses came against ranked teams.  The Patriots enter the playoffs with  March 20 19-0 win vs. University (first league game and win), April 19 23-1 win at Irvine, and April 27 22-2 win vs. Northwood.

Things to Know About Santa Margarita
The Eagles clinched another Trinity League championship last week after going 6-0 in league play for the second year in a row.  They have improved their win total every year of the Adam Guy era:  12 wins in 2014, 14 in 2015, and 15 in 2016.  With a 14-4 regular season record, Santa Margarita will have to get past the second round to keep up the trend.

Both teams are a lot alike: balanced offense, strong defense and great goalie play. Beckman has been undefeated since early April, and absolutely dominated the Pacific Coast League.  However, a low strength of schedule probably dragged down their ranking.

Overtime losses to No. 4 St. Margaret’s (a 4OT classic) and No. 3 Foothill kept the Eagles out of the top 4.  Santa Margarita struggled to beat Servite 11-10 on Saturday after beating the Friars 16-6 earlier in the season.  Signs of an Eagle let down or the Friars peaking at the right time?  We will see on Tuesday.  Santa Margarita will have to bring its A game if they want to get to the second round and a shot at avenging that loss to St. Margaret’s.