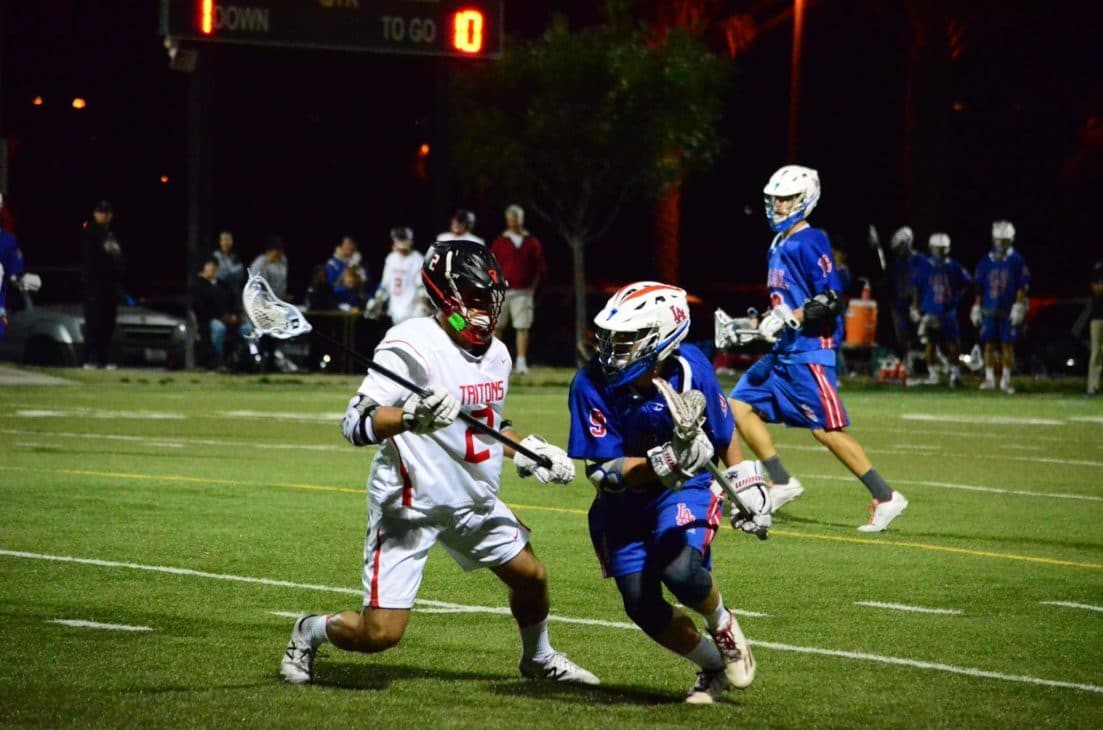 The No. 5 ranked San Clemente Tritons, took to the field Saturday evening to play Thousand Oaks Lancers (0‐1), the no. 7 team in Los Angeles. It was the season opener for the defending league champions.  The Tritons are the two-time South Coast League champs.  The Lancers sat atop the Marmonte League last season.

The Tritons started out strong with a 3‐ 0 lead with a goal from sophomore Aiden Fallon (1g) striking first followed by a pair from Liam Nelson who finished with an impressive six goals and two assists on the evening.

The Triton defense was looking impeccable during the first quarter, but the Lancers fought back and tied it up 3‐3 near the start of the second quarter. Jack Rogers played a vital role in the game by adding one goal and two assists to the San Clemente scoreboard and give the Tritons a 6-5 edge at halftime.

It was back and forth most of the game for the Tritons and Lancers. The Triton defense was lead by Dylan Hartanov with five ground balls and Nick Amico with a few as well. Lewis Ahola started and finished the game in the cage with a 50% save percentage and eight saves total on the night.

San Clemente showed signs of pulling away late in the third quarter but the Lancers made a late charge to tie the game 8‐8 heading into the final 12 minutes of play.

Even with the deadlock, the Tritons appeared well positioned as the fourth quarter began. The team was clearing the ball well going 87% successfully and controlling the face off X as well. Jake Brannon was an all‐around utility player winning 65% of faceoffs and leading the team with 6 ground balls playing both offense and defensive midfield.

The game was decided in a heated fourth quarter as it came down to Ryan Keany (1g) scoring on the crease with the go-ahead and ultimately game-winning goal for the Tritons. Nelson (6g,2a) stuck one more to seal the deal with under two minutes to go. Attackman Trevor Sutton (1g) also helped in the Saturday night victory scoring one goal.

Overall nice work by both teams and a great first win for the San Clemente Tritons kicking off their 2018 spring season.

The Tritons look to their next matchup against Newport Harbor on March 14th 7:00 on home turf at San Clemente High School. Stay tuned for further south county action, over and out.  The Lancers play Harvard-Westlake on February 28.