No. 5 Chaminade Overwhelms No. 4 Oaks Christian 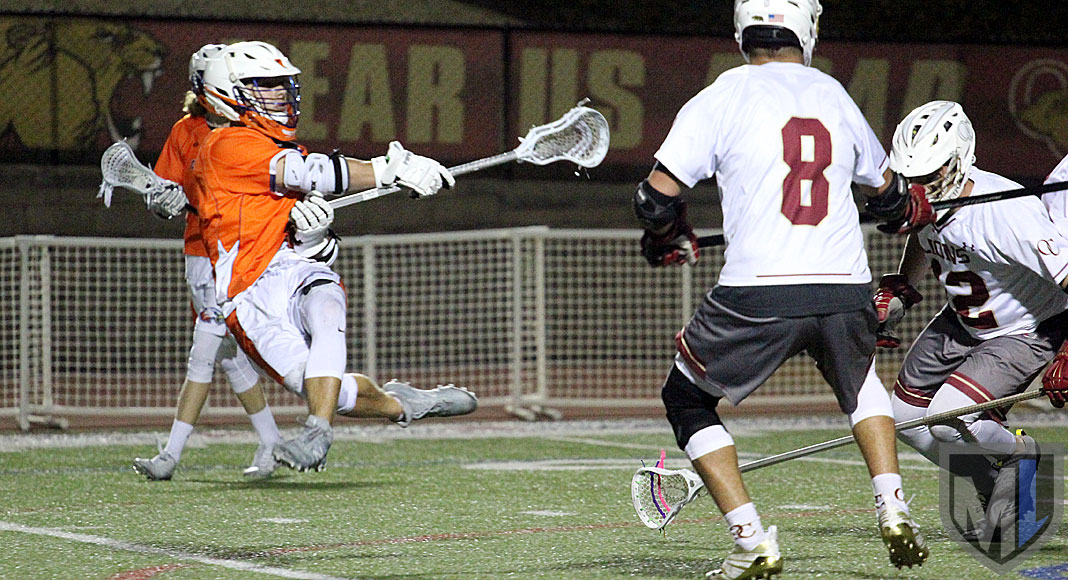 The Chaminade Eagles entered Friday night’s game at No. 4 Oaks Christian with a 3-0 record, all against ranked teams and two against teams that had been ranked ahead of them in the preseason coaches poll. But coach Steve Lane still felt his squad was somewhat complacent.

The fifth-ranked Eagles smothered the Lions with a zone defense that allowed the Lions very few clean looks at the goal and rode a seven-goal outburst in the second period to a 10-5 nonleague victory.

“We had a wake-up call last night at practice,” Lane said. “Everyone knows we have a very talented team, and we got a little bit complacent with the fact that we knew we were talented. We basically said it doesn’t really matter unless you step on the field and execute, and it hit home with a lot of guys. We had our upperclassmen, our seniors, setting the tone early. They stepped up as leaders today and set a really good tone.”

The Eagles (4-0) now have beaten three Marmonte League teams that were ranked ahead of them in the preseason poll — Agoura, Thousand Oaks and Oaks Christian.

Friday’s win clearly was the most complete. Five different players scored for Chaminade, led by sophomore Nico Rabushka (3 goals, 1 assist) and senior Andy Dyer (3g, 1a). The defense frustrated Oaks Christian throughout the game, forcing the patient Lions to keep moving the ball — and burning clock — in search of an open look. When they did shoot, Chaminade junior goalie Nick Carney stopped just about every one he saw coming.

“He played very well,” Lane said of Carney. “They only goals they got were perfect shots. If it was not a perfect shot, he made the save tonight. He just needs to get comfortable and mentally get engaged, and he’s great.”

Perhaps the most telling sequence came in the third quarter. Trailing 8-3, Oaks Christian won the face-off to start the second half. But the Lions burned away 5:10 of clock time looking for an open shot against the Eagles’ zone. When they finally fired at goal for the first time — a sharp-angle shot from Carney’s right — he smothered it and started the clear. A minute later, Rabushka dodged from X and hit an open Dyer on the wing, who buried the step-down to extend the Eagles’ lead to 9-3.

Oaks Christian eventually pulled within 9-5 at the 11:34 mark of the fourth quarter, but the Lions wouldn’t score again.

“We’ve been trying to fine-tune it,” Lane said of his defense. “We tried a couple different things in the first two games and basically figured out what was working well and what was not, and they executed tonight, especially in the first half.”

Oaks scored first, getting a fast-break goal from Cort Rogers on an assist from Jack Lenthall with 1:32 left in the first quarter. The Eagles pulled even a minute later on a transition goal from Rabushka after a failed clear by the Lions. Oaks was called for an illegal body check on the play, and Chaminade opened the second quarter with a man-advantage.

Dyer scored the man-up goal — one of three man-up goals for the Eagles — that opened the floodgates. Rabushka scored one-on-one from X a minute later to make it 3-1 (that’s the goal in the picture above). Mac Griffin hit a step-down from up top to make 4-1. Owen Larson twice dodge the right alley one-on-one to score, one right-handed and the next on a split-dodge back to his left. Dyer scored a man-up goal at the 4:05 mark to make it 7-1, and after Oaks finally scored another, Chaminade senior Max Kim beat his LSM down the right alley for another one-on-one goal to make it 8-2.

Trailing 8-3 at the break, the only question remaining was whether the Lions would solve the Eagles’ defense in the second half and mount a comeback. The opening five-minute sequence of the third period made it pretty clear they would not.

Cort Rogers (1g, 4a) led Oaks Christian’s offense, with Cade Rogers, Mike Spaeth, Carson Campbell and Spencer Lewis each contributing one goal. The Lions (3-1), who were coming off a road upset of No. 2 Palos Verdes, open Marmonte League play next week with home games against Thousand Oaks on Wednesday and Agoura on Friday.