No. 4 Harvard Westlake Rallies Past No. 3 Westlake 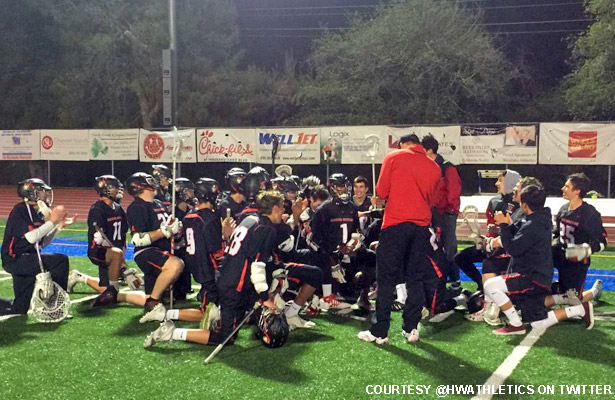 Senior middie Philip Thompson scored all three of his goals in the third period Friday night, propelling No. 4 Harvard Westlake to a come-from-behind, 7-6 win at No. 3 Westlake. It was the Warriors’ first loss of the young season.

The Wolverines (4-0) trailed 2-0 at halftime, their offense bottled up by the Warriors — and by 10 first-half saves by Westlake junior goalie Matt Kilkeary. But Thompson’s three goals and one from junior Zac Harleston had Harvard Westlake within 5-4 heading into the final period.

In fact, Thompson’s third goal, with just 12 seconds left in the third, touched off a four-goal run that essentially iced the game for the Wolverines.

Senior Jonas Hirshland pulled the Wolverines even at 5-5 a minute into the fourth period, and Harleston scored his second at about the 7-minute mark, ripping an outside shot on a feed from sophomore Paul Rodriguez with the Warriors a man-down.

Freshman Asher Early then got free on the doorstep after two defenders slid up high to Thompson, who kicked it over to Rodriguez, who made one more pass and found Early for an easy finish and a two-goal lead at 7-5 with 3:27 left. It was Rodriguez’s third assist of the game.

The Warriors tried to rally. Brett Reilly scored his second of the game with a minute left, and Westlake had possession with a man-advantage with 15 seconds to play but could not stick the equalizer in the cage.

Reilly and Duke Cohen each scored twice for the Warriors, and Jacob Mannisto and James Sullivan had one each. But after Cohen scored his second with 2:24 left in the third quarter to make it 5-3, Westlake went more than 13 minutes without a goal.

The Harvard Westlake defense and junior goalie Troy Hattler get credit for that. Hattler recorded nine saves in the game, five of them in the second half.

The loss ends Westlake’s week on a down note after the Warriors (3-1) opened it Monday with a 9-8 win over visiting No. 1 Palos Verdes, then crushed Crespi 18-7 Wednesday. Poised to move up in the weekly coaches poll, the Warriors might remain No. 3, if Harvard Westlake moves up from No. 4.

Moreover, Westlake must shake off the defeat by Wednesday, when it visits No. 7 Agoura (3-1) in each team’s Marmonte League opener.

The Wolverines now have beaten three Marmonte League teams in a row: 6-5 over Agoura in three overtimes; 13-10 over Thousand Oaks; and now 7-6 over Westlake.

Harvard Westlake opens Mission League play Tuesday with a visit from No. 2 Loyola.