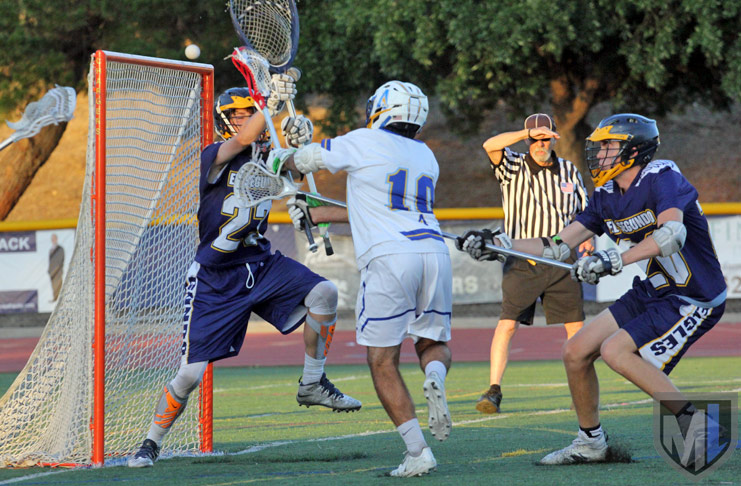 It took some time for fourth-seeded Agoura to find its offense Tuesday, but with a dominating edge on ground balls and a relentless push toward the goal, the Chargers ultimately coasted to a 16-3 win over visiting No. 11 El Segundo in the first round of the US Lacrosse Southern Section North playoffs.

Agoura beat Oak Park 8-7 on March 11, and the teams know each other very well. Many of them play together in the LA Mavs club program, where they are coached by Agoura’s Sean Lindsay and Oak Park’s Tarik Ergin.

For much of the first quarter Tuesday, it appeared Ocean League co-champ El Segundo (13-3) might be up to the task against Agoura. The Eagles scored first and held the Chargers’ offense without a goal until late in the first period. However, three transition goals had the Chargers in front 3-1, and when Agoura’s Marty Shargel slipped inside, danced along the crease line and buried a goal to make it 4-1, it foreshadowed what was to come.

The Chargers scored less than a minute into the second period and went on to score six unassisted goals — two of them by Shargel — to open up a 10-2 halftime lead.

Truth be told, it could have been worse. Eagles goalie Alex Nolan made eight first-half saves (and 17 overall) as the Chargers peppered the cage at will.

Agoura won 14 of 23 face-offs in the game and picked up 42 ground balls — 10 by junior LSM Cooper Isaacs — to El Segundo’s 23, and the Chargers pushed the pace at every opportunity. They finished with 48 shots, putting 33 of them on cage.

Defensively, Agoura managed to bottle up El Segundo senior Cory Lund (Williams College), who scored the Eagles’ first goal on a pretty inside roll but managed to squeeze off only four more shots against pressure from Agoura defender Taylor Dankenbring (Providence).

When the Eagles tried to move the ball inside, Agoura made them put it on the ground and scramble for the loose balls. When Gundo settled for perimeter shots, Chargers’ goalie Zach Tripp stopped them with ease, finishing with six saves.

Shargel and Gage Garrison each finished with four goals to lead the Chargers, and Boaz Conrad and Jacob Roub each scored two. Douglas McCarthy, George Galer, Noah Miller and Dankebring scored one each.

Lund finished with one goal and one assist for the Eagles, and Lukas Roscoe and Jacob Brockman each scored one.