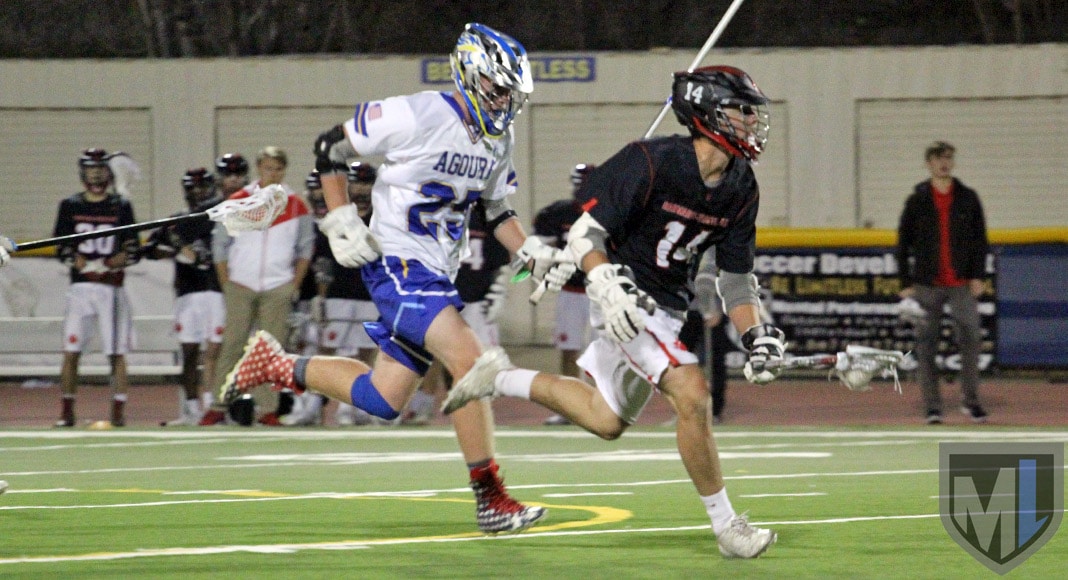 Behind a dominant advantage in possession time, due in large part to the work of junior middie Harrison Listen, third-ranked Harvard Westlake steadily wore down No. 7 Agoura on Wednesday to claim a 14-2 win that wasn’t nearly that lopsided in the early going.

Listen won 11 of his 13 face-offs, collected 10 ground balls and had three goals and three assists for the Wolverines, including a fast-break goal off a face-off win to open the second half. That goal extended Harvard Westlake’s lead to 6-1 and opened the floodgates. By the start of the fourth quarter, the Wolverines led 9-2.

“Our defense,” he said, “Lex Torrington did an amazing job. Alex Russell [12 saves] had some amazing saves.They had some good takes and some unlucky pipes, but our boys really stuck in there on defense, which I think allowed us to possess the ball a little more on offense.”

Agoura had some early turnovers — some forced by the Wolverines, some simply errant passes — and wasn’t able to generate a lot of clean looks at the goal against the Harvard Westlake defense.

“We knew we were going to get pressured and were going to have to handle pressure,” Agoura coach Sean Lindsay said, “and we knew we had to not turn the ball over throwing and catching. Against a really good team like these guys, you can’t throw the ball away and keep giving them opportunities.”

Harvard Westlake (3-0) led 4-0 after one quarter and 5-1 at halftime, but the Wolverine’s relentless pressure at both ends eventually ground the Chargers down and turned a tight game into a blowout.

Senior attackmen Paul Rodriguez (4 goals) and Reid Hudgins (2g) scored all of their goals in the second half as the Wolverines pulled away. Asher Early (2g), Jared Goldman (2g) and Alec Watts (1g) also scored for Harvard Westlake.

Gage Garrison and Bo Conrad scored for Agoura (2-2), and goalie Zach Tripp had seven saves before leaving in the fourth quarter.