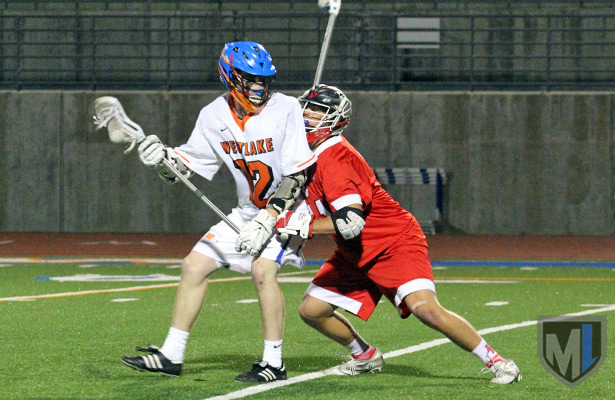 Senior middie Jacob Mannisto scored back-to-back goals less than a minute apart as part of a four-goal, second-quarter run that dug No. 3 Westlake out of an early deficit Monday and propelled the Warriors to a 9-8 win over visiting No. 1 Palos Verdes.

The Sea Kings, who have won the US Lacrosse Southern Section North title three of the last four years, were opening their season against the team they eliminated from the playoffs last year. In that four-year stretch, Palos Verdes had lost only five games to LA or Ventura County teams while going 69-20 overall.

Monday, it took the Sea Kings a little while to shake off the rust, but they forged a 3-1 lead behind two goals from junior Jack Larkin and one from junior Austin Lowi early in the second period.

But Westlake senior Brett Reilly, committed to NCAA D-I Jacksonville, fired up his team and the home crowd with a highlight-reel goal midway through the second quarter working against PV defender Shane Sharp, who is committed to D-I Lafayette.

Reilly dodged up the left side of the cage from X and tried to get over the top, but Sharp shut him off. So Reilly re-dodged back toward goal-line extended, but Sharp again cut him off. Reilly tried top-side one more time — unsuccessfully — before posting up against Sharp a few steps above GLE on the left side of the goal. With no slide defender coming, Reilly took a moment to eyeball the cage over his left shoulder, then fired a no-look laser beam shot over his right shoulder and into the far top corner.

The crowd — and the Warriors’ bench — erupted. The goal, with 5:33 left in the second quarter, cut PV’s lead to 3-2 and touched off a four-goal burst over the next three minutes that gave the Warriors a 5-3 lead. The run was fueled, too, by a winning streak at the face-off dot by Westlake junior Kitt Stoddard, who won 12 of 20 draws in the game.

Though the Sea Kings eventually would tie the score 6-6, they never regained the lead. Westlake’s defense, led by Dartmouth-bound James Sullivan (six ground balls and a number of caused turnovers) and junior goalie Matt Kilkeary (10 saves, five in the fourth quarter), held PV to two goals over a 22-minute span in the third and fourth quarters.

Larkin, Lowi and senior Rizal Smith each scored twice for Palos Verdes, and senior Mikey Booth had one. Sophomore LSM Josh Park scored with 49 seconds to play on a give-and-go feed from Lowi in transition to pull the Sea Kings within one at 9-8, and they had possession with a chance to tie as the clock wound down but couldn’t find the net.

Palos Verdes played without senior defender Jarrett Jones (Georgetown) and senior middie Peter Henkhaus (Marquette) due to injury. Their absence, the subsequent lineup shuffling and some first-game wrinkles contributed to the Sea Kings’ performance. But mostly it was a relentless Westlake defense sliding early and disrupting the PV attack, then chipping away offensively against Sea Kings goalie Connor Jongewaard (Connecticut College), who made 14 saves — but only one in the fateful second quarter.