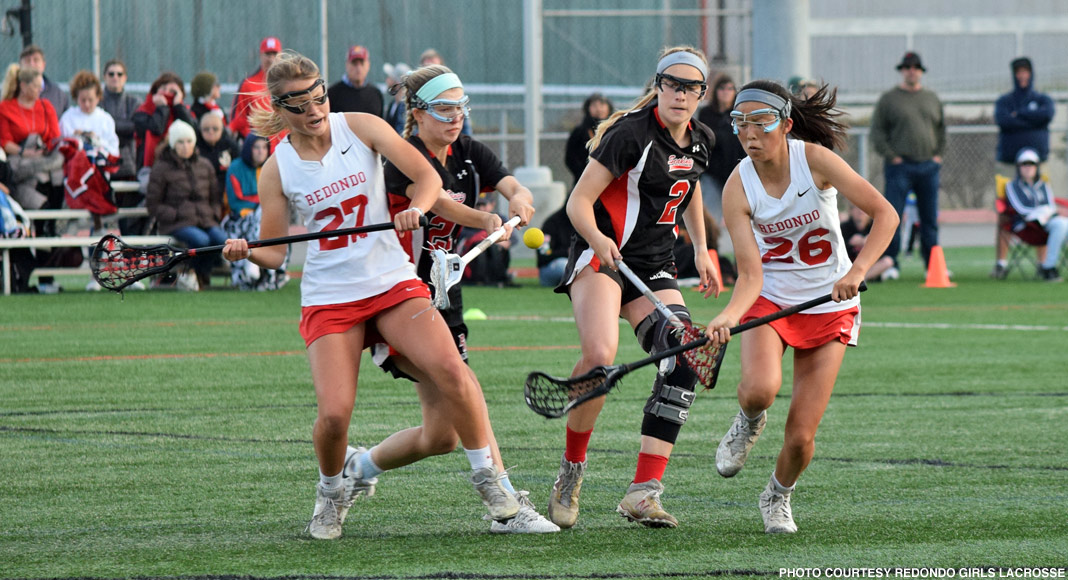 No. 2 Redondo Union dug its way out of a 5-0 hole against No. 1 Palos Verdes on Friday, then outscored the visiting Sea Kings 10-4 in the second half to win the Bay League contest 14-8.

For the first 15 minutes though, it looked like Palos Verdes might be on its way to a second win over the Sea Hawks this season (third, if you count the Rose Bowl Jamboree, a shorter, tournament-length game). With Palos Verdes senior Kelly Hoyt scoring four of her team-high six goals and junior goalie Lily Vancans making six first-half saves, the Sea Kings came out hot at both ends of the field.

But Redondo Union roared back, pulling within 5-4 by halftime on two goals from Brooke Tokushige and one each from Addy Bass and Sophie Ristorcelli, then riding three second-half scoring streaks to pull away.

Tokushige (6g) keyed the Redondo comeback both at the draw circle and in the offensive end. With Tokushige taking the draws, the Sea Hawks won 12 of 14. On offense, she led Redondo with six goals, including the first two in the first-half streak and the first-two in the second-half streak that put Redondo in the lead.

With the score 6-5 early in the second half, Redondo hit another hot streak, scoring four goals in three minutes. Tokushige scored the first two, and Jordan Davis (4g) and Emma Hodges (1g, 3a) scored 10 seconds apart to put the Sea Hawks ahead 9-6.

Hoyt scored her sixth goal a minute later to cut the lead to 9-7, and back and forth they went in one of the best high school games of the year by the two top-rated teams.

Tokushige’s sixth goal made it 10-7, giving Redondo a three-goal lead again, but right away PV came back and cut the lead to two.

But another Redondo streak was coming.

Redondo (9-1) faces No. 7 Crescenta Valley at home Tuesday before taking the rest of the week off for spring break and returning to action April 17. Palos Verdes (6-1) is off until April 10 when it travels to meet No. 3 Westlake.