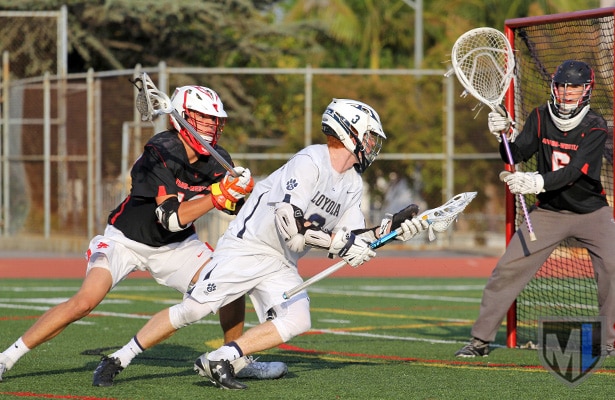 For three quarters Saturday, No. 2 Loyola played nothing like the team that beat No. 3 Harvard Westlake handily twice in Mission League play during the regular season. But all it took for the Cubs to advance to Wednesday’s US Lacrosse LA Division title game was one quarter of playing to their capability.

The Cubs (18-4) advance to meet No. 1 Palos Verdes for the championship Wednesday at Mira Costa (7 p.m.), a rematch of a March game in which the Sea Kings rallied for a 6-5 overtime victory.

For much of Saturday’s game, though, it appeared that rematch might not happen. Harvard Westlake led 3-0 early and 3-1 after one quarter. The lead was 4-3 at halftime, 7-5 after three quarters and stretched to 8-5 when the Wolverines scored off the face-off to open the final frame, with Philip Thompson hitting Paul Rodriguez for the outside rip.

The Wolverines (14-5) were winning possession on face-offs and ground-balls, holding the ball with a patient, deliberate offense, and gradually pecking away at the Loyola goal. And when the Cubs did gain possession and run their offense, Wolverines goalie Troy Hattler stood tall, denying shot after shot. The high-scoring Cubs, who had scored 20 goals in three consecutive games coming in, had only five through three quarters.

For the second time in as many seasons, Loyola was struggling to beat a Mission League opponent for the third time in a season. Last year, the Cubs twice handled Crespi easily during league play but lost to the Celts in overtime in the second round of the playoffs.

This year, they twice handled Harvard Westlake, winning 12-6 and 10-5, only to struggle in the third meeting in the playoffs. History was 12 minutes from repeating itself.

But then the real Cubs showed up. Junior Ryder Mora scored a minute into the fourth quarter to make it 8-6 and spark the run that turned the game around. Senior Sean Smith scored minutes later, followed by a Henry Hasenberg dodge from X that tied it at 8-8 with 7:52 to play.

Garrett Smith finally gave Loyola its first lead at 9-8 with 5:07 to play, and Jonathan Partamian scored his third of the game — a man-up goal on a feed from Mason O’Hanlon with 3:37 left — for a two-goal lead.

Five consecutive goals in about eight minutes finally allowed the Cubs to exhale and start looking ahead to Wednesday.