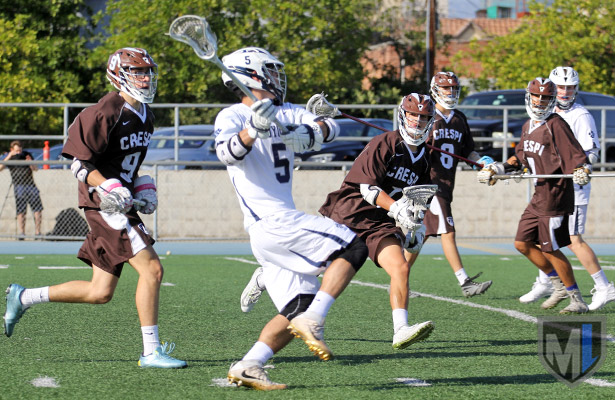 It took No. 2 Loyola only a minute and a half to get on the board against visiting No. 13 Crespi on Saturday, and by halftime the Cubs had an 8-1 lead with each goal scored by a different player. Loyola went on to win 13-5 behind three goals from junior Jonathan Partamian and two each from senior Sean Smith and junior Garrett Smith.

The Cubs (4-1) dominated possession in the early going, keeping the ball in Crespi’s defensive end and out-shooting the Celts 20-12 in the first half. Sophomore Aiden Hesse won seven of 10 face-offs in the first half and 14 of 22 for the game.

Only five of Crespi’s 12 first-half shots were on cage, and Cubs junior goalie Joe Theuer stopped four of those. The Celts finally got on the board with 24 seconds left in the half when sophomore Connor Pierce found freshman Logan Soelberg, who beat Theuer low.

Crespi actually managed to cut Loyola’s lead to five goals at 9-4 late in the third period, but Partamian scored less than a minute later to restore a six-goal lead, and the Cubs rattled off three more in the first five minutes of the fourth period.

Connor Leste scored twice for Crespi, and Jake Milkovich, Rafa Francisco and Soelberg each scored once.

The Celts lost their fifth consecutive game to open the season, the first time they’ve been 0-5 since 2006.