No.18 Newport Harbor Rallies Back, Stuns No.8 Mater Dei 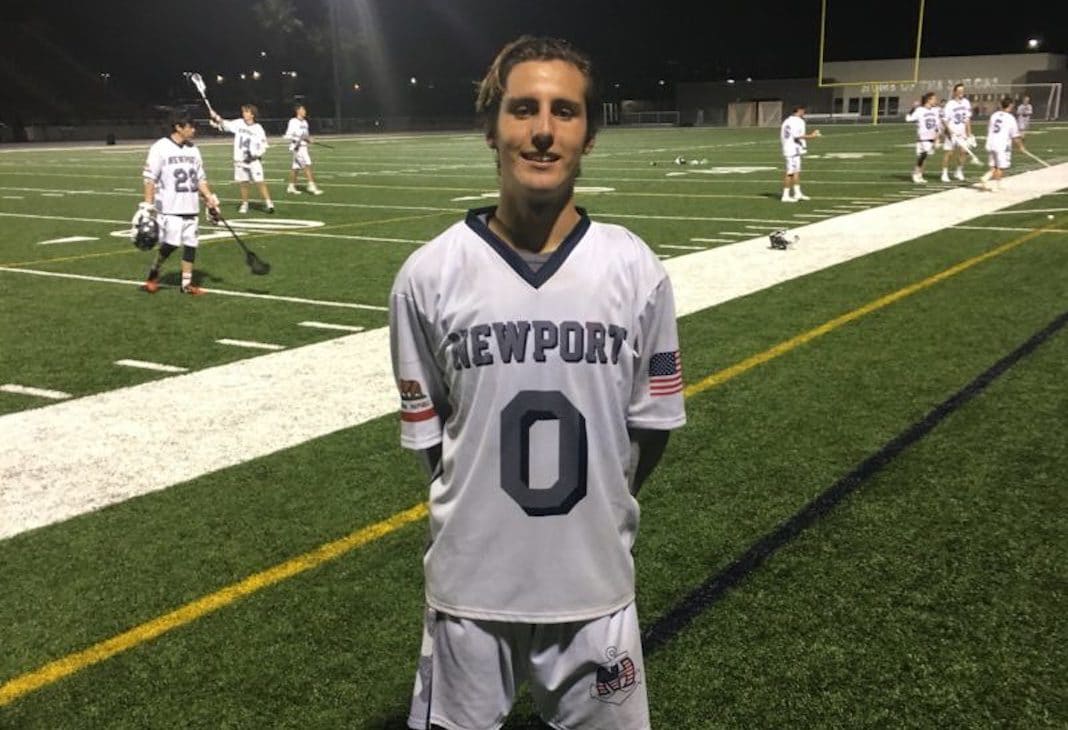 Newport Beach – The Newport Harbor boys lacrosse team are no strangers to one-goal games. Dating back to last season, the Sailors have played five games decided by one goal but have not had much luck in them, having lost four out of five.  That changed last night.

With the No.18 Sailors seemingly on the cusp of a breakout win, after a 6-5 loss to  No.7 Servite less than a week ago, the Sailors host No.8 Mater Dei, a team that beat them by one goal last season. This time, the Sailors were on the winning end of the one-goal game.

“We’re a family at Newport Harbor, and we’re pushing each other through it all. I couldn’t be more proud of everyone. It wasn’t just me it was everyone on the team,” Rouch said.

The game started with rain and with the Sailors leading 3-1 midway through the first quarter. But after their third goal, they were unable to score the remainder of the first half. The Monarchs had no such problem, led 4-3 going into the second quarter, and scored with 22 seconds remaining in the quarter to take a 5-3 lead into halftime.

The second half started out mimicking the first. The Sailors knotted the score up at 5-5 in the first 1:40 in the third quarter, but went through another scoring drought allowing the Monarchs to lead 6-5 after three quarters of play.

The fourth quarter saw the Monarchs score the first three goals of the quarter to take a 9-5 lead. Rhett Farmer ended the Sailors’ drought, but Zach Torres, who led the Monarchs with four goals, put Mater Dei up 10-6 with a goal with 5:32 left to play.

Then the Sailors started to mount a comeback, as they scored three straight goals to pull within 10-9. The Monarchs went up 11-9 thanks to a goal from Jack Brennan leaving the Sailors with 3:11 left to make a comeback.

Neither team was able to find the back of the net in the second overtime, but Mater Dei’s best chance to win it came in the last 39 seconds. The Sailors were a man down and the Monarchs had a good look from Matt Kane. But the shot was saved by Newport Harbor goalie Garrett Rovazzini.

The Monarchs had the ball in the third overtime but turned it over off an overthrown pass. The Sailors got it up the field and coach Mark Todd called a timeout with 2:52 left to play.

The timeout worked, as Rabin found an open Rouch, and with 1:57 remaining, Rouch was able to notch the game-winner. The game ended with the Sailor players storming the field.

“I was really proud of the resilience our guys showed. Mater Dei’s a great team. My heart goes out to them because I’ve been on the other end of [losing the game],” Todd said adding that Newport Harbor was a man down in all three overtime periods and toward the end of the fourth quarter.

Farmer led the way for the Sailors with three goals while Rouch, Rabin and Fuller had two goals apiece. Goltz, Race Mooers and Zach Quinonez each chipped in one goal while Rovazzini made seven saves.

The Monarchs got contributions from Brennan, Sean Waterman and Aedan Frazier who each had two goals while Joshua De Bono added one goal. TJ Vigeland made 11 saves.

“It certainly hurts. It’s not easy to lose in triple overtime no matter what time of year it is. This is early in the season, this is going to teach our guys a lesson and I think we’re going to grow from this,” Mater Dei coach Johnny Rodriguez said. “They [Newport Harbor] showed a lot of endurance, a lot of poise and resilience. I thought Mark Todd prepared well.”

While Todd, who is good friends with Rodriguez, is happy that his team pulled the upset, he knows his team can improve.

“We just got to dig a little bit deeper and stop making so many personal mistakes,” Todd said.

Up next for Newport Harbor (2-1), the Battle of the Bay game at rival Corona Del Mar on Wednesday at 3 p.m. For Mater Dei (1-1), they play Corona of Santiago in its first home game of the season on Monday at 7:30 p.m.