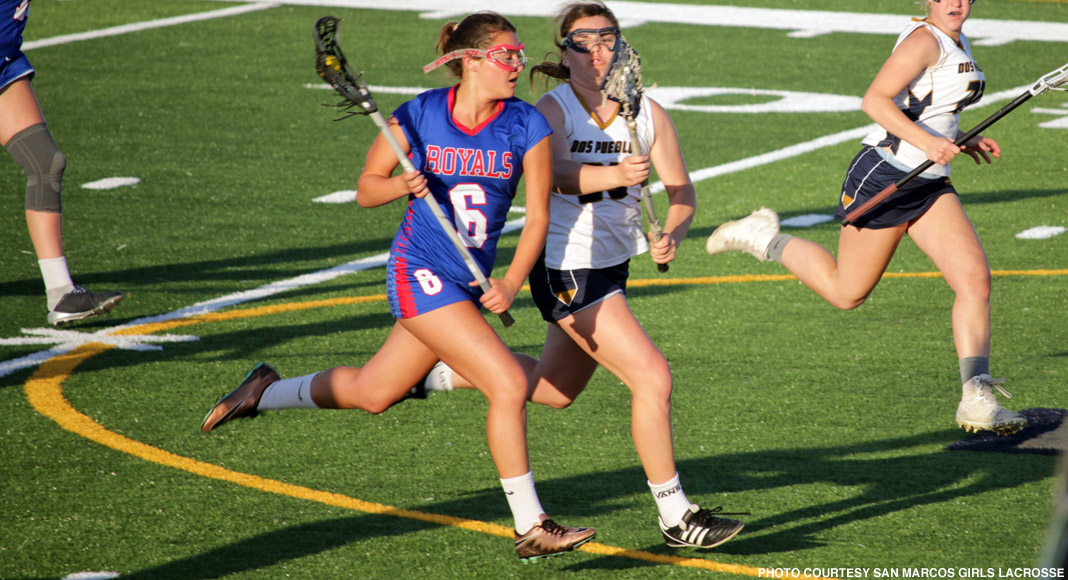 No. 17 Dos Pueblos needed overtime Tuesday, but the Chargers nevertheless pulled out their 12th consecutive victory when sophomore attacker Sydney Steele scored unassisted on a dodge from behind the cage to lift her team to a 7-6 win over visiting San Marcos in Channel League play.

Dos Pueblos (13-2, 7-0), the defending LA Invitational Tournament champion and likely top seed in that bracket this year when seeds are announced Sunday, had beaten San Marcos 13-5 the first time the teams met but led only 4-3 at halftime Tuesday.

San Marcos gave the Chargers fits all game long with gutty defense and relentless effort on ground balls. The work paid off, and the Royals made a three-goal run to open the second half, forging a 6-4 lead. San Marcos senior Demi Robitaille scored all three times in the Royals run and finished with a game high four goals.

Dos Pueblos chipped away at the Royals’ small second-half lead to force the extra period and set up Steele’s game-winner 4:24 into the overtime.

“Both defenses and both goalies played outstanding,” San Marcos coach Paul Ramsey said. “Goals were hard to come by in this one.”

Junior Olivia Geyling scored three goals to lead the Chargers, but it was her second score that caused the crowd to erupt. That unassisted goal with 12:49 remaining in the first half was 100th goal of Geyling’s two-year varsity career. The home crowd went absolutely crazy. Bananas would be a good description. Geyling is the first Dos Pueblos player to reach the 100-goal plateau in the five-year history of the program.

“It was definitely an exciting game to watch,” Dos Pueblos assistant Jess Delgadillo said, “and both teams fought extremely hard all the way through. Though the excitement got the best of everyone at times, we were able to relax and hold onto the ball in overtime which ultimately led to our win.”

The Chargers travel to Thacher to wrap up the regular season on Thursday. San Marcos plays host to Santa Barbara on Friday in a 4 p.m. game at Warkentin Stadium.

The two tournaments will seed 24 teams into their brackets, 16 in the Championship event and eight in the Invitational event, meaning there a couple of teams sitting between San Marcos and a possible playoff spot.