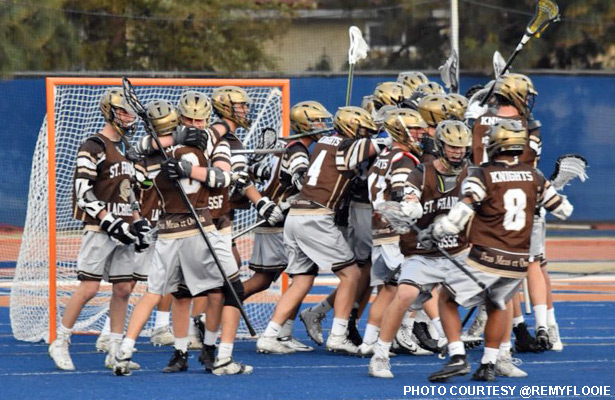 St. Francis, ranked No. 16 in the coaches poll, staged a second-half rally Friday night to stun the No. 7 Chaminade Eagles 11-7 in a Mission league game, perhaps the most significant victory in the St. Francis program’s brief history.

The Golden Knights (8-6, 3-4) have played lacrosse for four seasons and are on the verge of earning the school’s first playoff berth. With three games remaining, one in league play, St. Francis has a shot at double-digit victories for the first time, as well.

In the early going Friday, though, not much appeared to have changed. Chaminade (10-5, 3-3), which had beaten St. Francis in all five previous meetings between the schools, took a 3-1 lead after one quarter and extended it to 5-2 at halftime. It was senior night for the Eagles, and they were fresh off an upset of their own — Tuesday’s 14-9 triumph over No. 3 Harvard Westlake.

Chaminade had handled the Knights 17-4 the first time the teams met this season, so what could go wrong?

St. Francis answered that with a 5-0 blitz in the third quarter to take a 7-5 lead into the final period. The Knights still held a two-goal lead at 9-7 with five minutes to play before tacking on two more for insurance and closing out the upset.

Asked via text what happened, a letdown after the win over Harvard Westlake, or the continued absence of key injured players, or St. Francis simply playing a great game, Chaminade coach Steve Lane was blunt: “All of the above.”

Senior goalie Michael Guida, who has started every game between the pipes in his four-year St. Francis career, made 17 saves for the Knights, a big factor in holding Chaminade to only two goals in the second half.

The Knights finish Mission League play Tuesday at Harvard Westlake, then have nonleague games at West Ranch and Valencia.

Chaminade must regroup by next week to avoid sliding into the playoffs on a losing streak. Crespi visits West Hills on Tuesday, and the Eagles visit No. 2 Loyola on Friday.