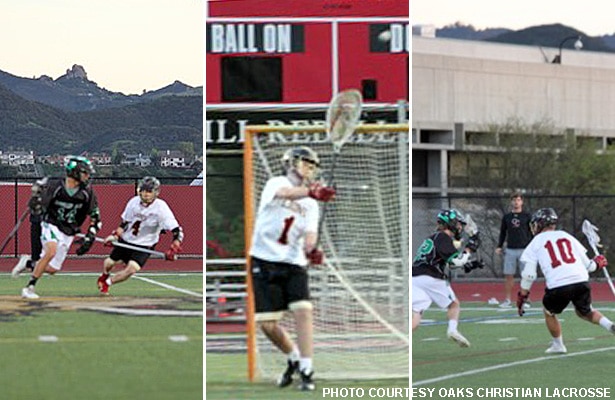 Oaks Christian stumbled out of the gate this season with a 10-6 loss. But the No. 15 Lions righted themselves and now have won three of their next four, including Wednesday’s 8-5 takedown of No. 5 Thousand Oaks.

Oaks Christian hadn’t beaten one of the Marmonte League’s Big 4 — Westlake, Agoura, Newbury Park or T.O. — since an overtime win over the Lancers early in the 2013 season. — a string of 19 consecutive losses to those four.

Under first-year coach Jeremy Sieverts this year, Oaks Christian is doing it with defense. In the four games since surrendering 10 goals to Chaminade, the Lions have allowed a total of 15 goals, including a 5-4 overtime loss to Newbury Park. With senior long-poles Kaveh Torabian and Cole Eisel patrolling the restraining box, goalie James Vils has had plenty of protection.

Wednesday, Oaks (3-2, 2-1) allowed only one goal in the first half in building a 4-1 lead and only three goals through three quarters. The Lions led 5-3 entering the fourth quarter and made it stand up.

Oaks Christian freshman Mike Spaeth battled Lancers sophomore Matthew Parham at the face-off dot, winning eight of 14 draws and preventing the Lancers from getting into an offensive rhythm.

Thousand Oaks (4-3, 2-1) was held to five goals or fewer for the third time in its last four games.