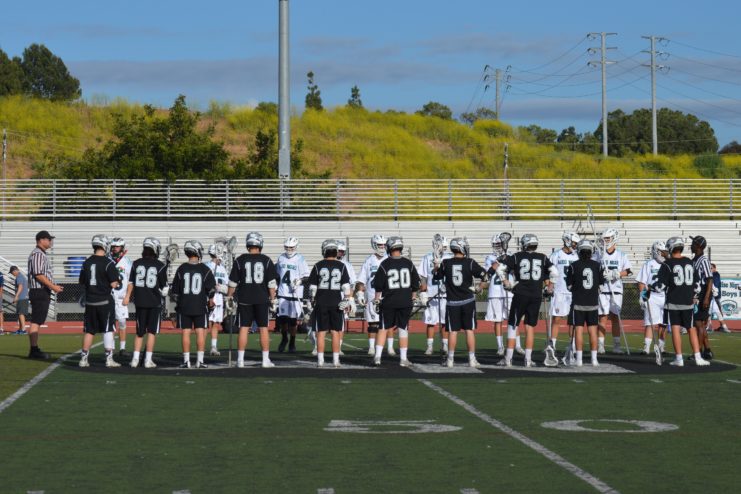 No. 13 Trabuco Hills made a convincing argument for a higher ranking Tuesday night by defeating South Coast League rival No. 12 Aliso Niguel 7-2.  The Mustangs (3-3, 7-5) swept the season series with the Wolverines (1-4, 6-8) who are in a late season slump.

The game got off to a slow start for both teams despite the importance for future playoff implications. Trabuco Hills started the scoring with a goal from sophomore Jared Friesen off an assist from Jason Kauo. Mustangs sophomore Holden Evans scored the games next goal to put the Mustangs up 2-0 as the first quarter came to an end. The Mustangs relied on their defense led by seniors Jared Schoessow and goalie Kyle Thibault to keep the Wolverines at bay.
The second quarter was mostly a defensive battle with both team struggling to generate anything on the offensive end. The Mustangs were blanked by Aliso Niguel’s goalie who made a number of quality saves on high percentage shots from several Mustangs. The Wolverines scored two second quarter goals and the first half ended in a 2-2 tie.
The Mustangs regrouped at halftime and took control of the game in the third quarter with solid team defense. Trabuco Hills’ long pole defenders Jake Fox, Will Mortenson and LSM Griffin Caron stymied the Wolverines attempts on offense by forcing turnovers and clearing the defensive zone with regularity. The Mustangs defense held sting and provided their offense with extra possessions. The Mustangs took control of the game in the third quarter behind two goals from Sophomore AJ Switzer and two from Friesen to complete the hat trick. Mustang short stick d-middies Justin Paget and Josh Burdette controlled the wings and shut off the Wolverines midfield players.

The Mustangs got a late empty net fourth quarter goal from Senior Captain Mason Morris to put an exclamation point on a dominating 5-0 second half performance for a 7-2 win that should help them move up in the Coaches Poll.
The Mustangs (7-5 and 3-3 in the South Coast League) return to action at Trabuco Hills on Thursday for Senior Night against the J-Serra Lions.   The Wolverines play Dana Hills on Thursday.