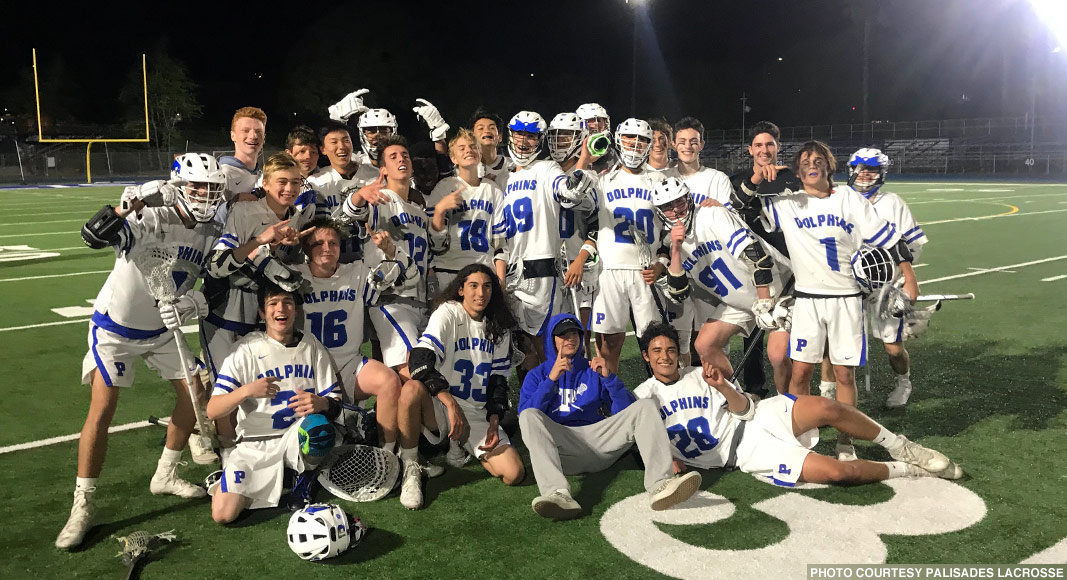 No. 13 Palisades outscored visiting No. 7 Sierra Canyon 8-4 in the second half Tuesday, producing an 11-10 come-from-behind victory over a Top 10 opponent and celebrating senior night in style.

Ethan Rubin (1g, 3a) scored the game-winning goal with 12 seconds to play, cutting from X, taking a feed from midfielder Reicher Bergstein up top and under-handing the ball past Sierra Canyon keeper Eli Tuovsky.

Junior attack Alessandro Caso (6g) carried much of the offensive load for the Dolphins, who were playing their third game in four days and were feeling some of the physical effects. Palisades (10-6) lost Saturday at No. 10 St. John Bosco, then beat Birmingham in a City League game Monday. Senior captain Jack O’Rourke was banged up against Birmingham, but he told coach Kevin Donovan there was no way he was missing senior night against a Top 10 opponent.

“Yeah, Jack was limited, but he still battled to just be on the field,” Donovan said via text. “He could barely pass and catch pregame without pain, but he is our leader, and he told me, ‘No way am I missing senior night and not playing with my teammates.’ He’s a true leader.”

With O’Rourke (2a) limited, Caso, Rubin and the rest of the Dolphins stepped up. Grant Wilson and James Burks each had two goals and an assist, and Bergstein and Henry Hallowell each had an assist.

After Sierra Canyon built a 6-3 lead at halftime, Donovan said he told his team to look for Caso.

“At halftime I said we are gonna get the ball to No. 24 and try to get him open for good matchups,” Donovan said. “Just a lot of picks and good ball movement. Caso can finish really well, so once he was open, we got him the ball to shoot. Eli, their goalie, is really good, so it took Caso’s shooting skills to beat Eli.”

The Trailblazers (5-6) led 8-6 entering the fourth quarter but wouldn’t score again until the final minutes of the game. Palisades goalie Luc Schifino made four of his 10 saves in the final frame. In all, the Dolphins’ defense limited Sierra Canyon to two goals in the first 21 minutes of the second half, fueling the comeback.

The Dolphins, meanwhile, kept chipping away. Caso scored on a feed from O’Rourke to make it 8-7, then scored back-to-back goals on assists from Rubin to tie it 8-8 with 9:24 to play and give Pali a 9-8 lead with 7:19 left. Four minutes later, O’Rourke found Burks for the goal that stretched the lead to 10-8 at the 2:55 mark.

Sierra Canyon managed to recover and forge a 10-10 tie with 30 seconds left, but Bergstein and and Rubin produced the game-winner for Palisades.

It was a significant win for the the Dolphins, who have been ranked just outside the Top 10 all season. With previous losses to Top 10 teams Chaminade, Oak Park and Agoura — then Saturday’s loss to then-No. 11 Bosco, which moved to No. 10 after that win — Palisades was in need of a resume-building victory to go with their previous win at Crespi.

The Dolphins have one more challenge — and one more chance at a resume-builder — before taking a much needed spring break. They play at No. 11 Mira Costa on Thursday, then are off until traveling to face No. 19 Brentwood on April 23.

Sierra Canyon faces Brentwood on Thursday then Mira Costa next Tuesday, both games at home in Chatsworth.