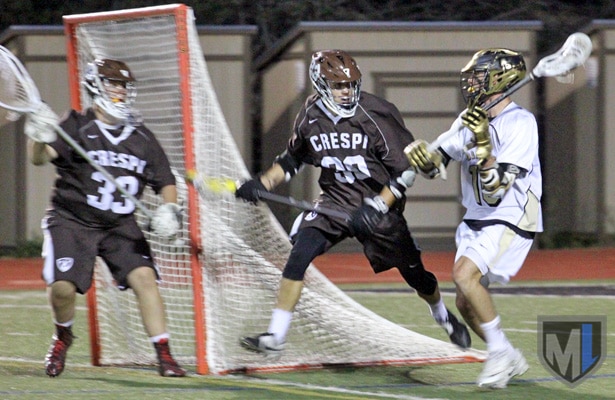 The Crespi Celts came within about 90 seconds of breaking their 12-game losing streak Tuesday night, but a resilient Oak Park squad, ranked No. 13 in the coaches poll, recovered from a mid-game scoring slump with a big fourth quarter and won 13-12, its second one-goal victory in a row.

Oak Park (7-9) entered the fourth quarter trailing Crespi 10-7 but scored twice to pull within 10-9. Crespi added a goal with 6:27 to play, but the Eagles answered with two more, tying the game 11-11 at the 4:30 mark on a goal from sophomore middie Bryce Hardy, his fourth of the game.

Crespi regained the lead with 2:40 left, but Oak Park re-tied it 30 seconds later, then took its first lead since early in the second quarter when Hardy scored his fifth on an assist from freshman Marcus Jasso.

The Celts (0-13) had one last chance to tie in the final 30 seconds, but defender Casey Hoops trail-checked the ball away from Celts junior attack Jake Milkovich.

As much as the fourth quarter — and the first, when Oak Park took a 4-0 lead — belonged to the Eagles, the second and third quarters were all Crespi. The Celts outscored Oak Park 7-2 in the middle periods. In fact, after Oak Park built its early 4-0 lead, Crespi changed up its defense and held the Eagles to only three more goals until the fourth quarter, eventually leading 9-5, then 10-6.

Hardy (5g, 1a) and junior Max Bulko (4g, 4a) staked the Eagles to the early lead, scoring or combining on all four goals. Hardy scored three of them, all assisted by Bulko, and Bulko scored the other unassisted. For the game, 10 of the Eagles’ 13 goals were assisted, as well-timed cuts and precision passing left Crespi goalie Noah Davila regularly facing point-blank shots.

Sophomore Adam Julius (3g, 1a), Jasso (2g, 1a) and sophomore Jake Pisarcik (1g) also scored for the Eagles, and senior Troy Robertson contributed two assists. Junior Sam Torgove won 19 of 27 face-offs in the game, including six of eight in the fourth quarter, sparking the Eagles’ rally.

It was the second game in a row Oak Park rallied late. The Eagles trailed Thacher 4-0 early and 10-6 late last Thursday but scored five unanswered goals to win 11-10.

Though the Celts remained winless on the season, Tuesday was their best offensive output of the season and their most competitive game since losing 10-9 in double overtime to Peninsula. According to LaxPower.com, Crespi’s strength of schedule (SOS) ranks No. 1 among L.A. and Ventura schools. All of the Celts’ losses have come against teams currently ranked in the Top 20, nine of them to teams currently in the Top 10.