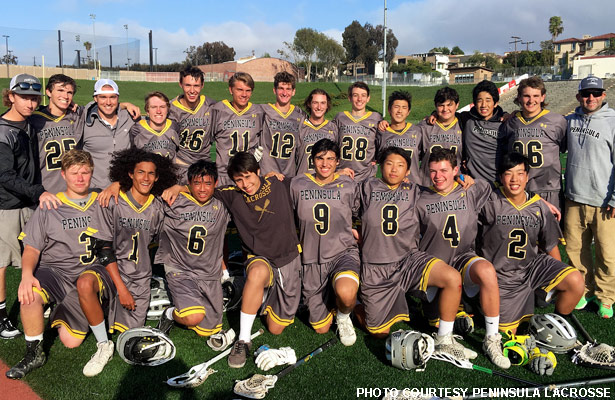 Senior attack Emilio Nunziati scored his third goal of the game 1:28 into overtime Tuesday, giving No. 12 Peninsula an 8-7 upset victory over No. 5 Agoura.

The win puts the Panthers (12-5) into a second-round game Thursday at No. 4 Westlake, which beat Mira Costa 14-7 on Tuesday.

Nunziati’s game-winner also put an end to an inspired rally by the Chargers, who trailed 3-2 at halftime and 5-2 midway through the third quarter in the defensive battle.

But goals from freshman Zach Tripp and senior Liv Bar brought Agoura within 5-4 heading to the fourth quarter, and goals from junior Noah Miller and senior Lucas Lagola, his second of the game, gave the Chargers a 6-5 lead with 9:58 to play in regulation.

The score remained 6-5 for the next seven and a half minutes before junior attack Kyle Beachboard pulled Peninsula even at 6-6 with 2:27 to play. The Panthers finally regained the lead at 7-6 with 1:14 to play, but sophomore middie Spencer Foreman scored for Agoura off the face-off just seven seconds later to knot the score 7-7.

Lagola had two goals for Agoura (10-7), and Marty Shargel, Miller, Tripp, Bar and Foreman scored one each.