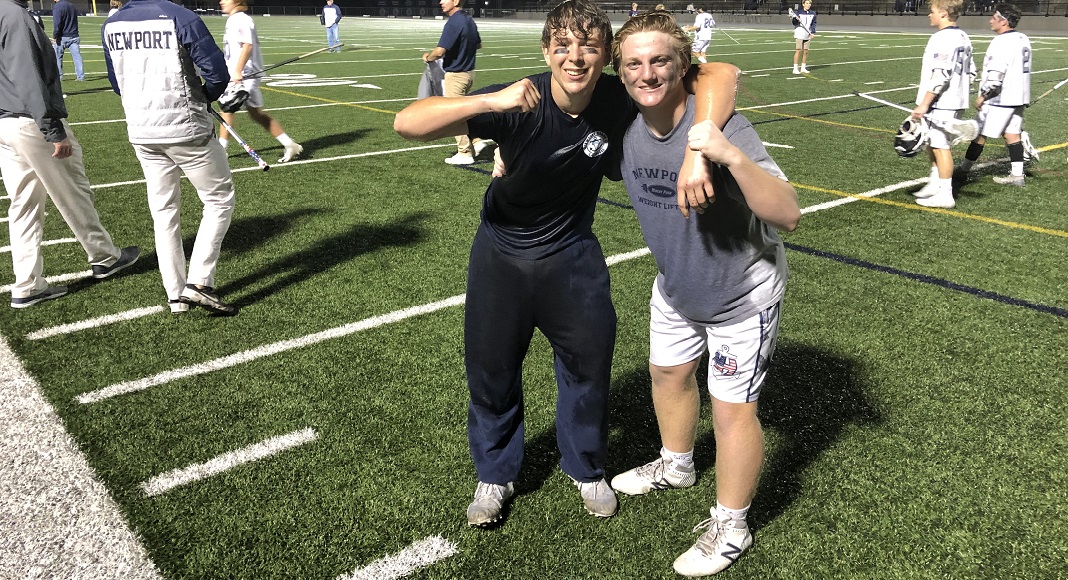 The Newport Harbor boys lacrosse team made history on Wednesday at Newport Harbor High School, beating Corona Del Mar 5-4 for the first time since 2005. In snapping the Sea Kings’ 15-game winning streak in the annual Battle of the Bay rivalry game, the Sailors (9-6, 5-0) clinched a share of the Sunset League title.

Newport Harbor plays at Los Alamitos on Friday at 6 p.m. If the Sailors win, they will be the outright league champion, but if the Griffins (6-5, 3-1) win, the Sailors, Sea Kings and Griffins, barring an upset from Edison Wednesday, will share the league title.

One thing was certain, Garrett Rovazzini (pictured left), who finished with 10 saves, was happy that his team beat the Sea Kings. He also got an ice water bath after the game.

“I know we came out with enough energy from the start. We wanted it,” Rovazzini said.

The game was back-and-forth, with neither team ever leading by more than one goal.

CdM only led once in the game and that was early in first quarter when Simon Hall ripped one past Rovazzini to give the Sea Kings a 2-1 lead. The Sailors responded with two unanswered goals to carry a 3-2 lead into the second quarter. Neither team scored again until Aidan Kelly scored the equalizer for the Sea Kings 36 seconds into the second half.

The Sailors answered with a goal of their own and led 4-3 heading into the final frame.

A scary moment for the Sea Kings occurred in Q4 when goalie Kyle Cord went down with an injury after taking  a check to the head as he advanced the ball up the field.  Cord had to leave the field temporarily to recover and the Sailors were assessed a one minute penalty.

CDM Goooal! Eusey with a dime to Caffarelli for the goal. We’re tied 4-4.

Richard Eusey and Ty Cafferelli teamed up during the EMO to knot the game at 4-4 but CdM was unable to beat Rovazzini after that.

With less than four minutes to go, the Sailors and Sea Kings scrambled for a loose ball, but was recovered by Newport Harbor’s Braydon Butler, who fed the ball to Rhett Farmer (pictured right) and Farmer’s no-look shot found its way into the goal.

A few minutes later the Sailors stormed the field with excitement, knowing that they beat their rivals.

“For us to get this win, it’s a nice win, but we still got more work to do. We still got to play Los Alamitos,” Sailors coach Mark Todd said.

Farmer led the Sailors with two goals while Michael Morrison, Aidan Goltz and Hutton Wooters each had one goal.

“I’m just happy to be the steward for these boys. For me, it’s very rewarding to see their work pay off. I take none of the credit, it’s all for them. They [Newport Harbor] put in the work,” Todd said.

Kelly, Logan Ip, Simon Hall and Ty Caffarelli each scored once for Corona Del Mar, which got five saves from Cord. Mix gave props to the Sailors on the win.

“They made the plays when they needed to make them and we didn’t. We knew they were a good team. They did a nice job,” Mix said.