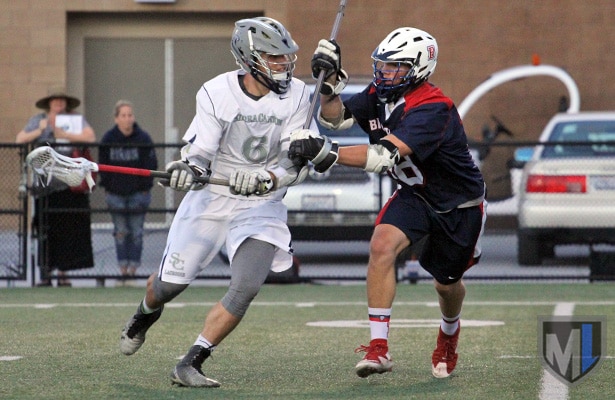 Coming into Thursday night’s Gold Coast League matchup with No. 18 Brentwood, it had been exactly a month, March 21, since No. 12 Sierra Canyon had been truly challenged in a game. That’s when the Trail Blazers held off Newbury Park for a 15-14 victory. Since then, they had won five in a row by an average score of 17-4.

Thursday, they proved more than capable of holding off a challenge, riding a dominant face-off performance from senior Jake Pistotnik and a balanced offense that benefitted greatly from the return of an injured player to a 14-6 win.

Pistotnik, who will play MCLA lacrosse at California next year, actually lost the opening face-off, and Brentwood promptly scored on the ensuing fast-break for a 1-0 lead. But Pistotnik won 22 of the next 23 draws, enabling the Trail Blazers to find an offensive rhythm.

Miles Rosberg got Sierra Canyon even three minutes into the game, scoring on an assist from Pistotnik, and the Blazers (10-1, 4-0) took the lead for good at about the five-minute mark on a sweeping, lefty dodge from freshman Andrew Berg.

That was the first of five goals for Berg, who was essentially making his season debut. He suffered a broken jaw in the first quarter of Sierra’s opening game at St. Francis on March 1 and hadn’t played since. Thursday, he more than made up for lost time, and his return gave the Blazers’ offense another dimension.

Berg, who played midfield in the first half and attack in the second, led Sierra in goals, scoring two unassisted and three as a target for playmakers Pistotnik (3g, 4a) and Rosberg (2g, 3a). Ryan Levine (2g), Matt Chopp (1g) and Matt Schwartz (1g) also scored for the Trail Blazers.

Still, Brentwood (9-5, 3-1) did not go down easily. The Eagles trailed only 6-2 at halftime and 9-5 with 10 minutes to play. Facing a lopsided edge in possession for the Blazers, Brentwood’s defenders held up, sliding early, throwing hard checks and clearing with ease.

But offensively, Brentwood struggled all night to solve Sierra’s defense, which surrendered few open looks and managed to kill off three penalties. The Eagles put only 13 shots on goal, and Sierra goalie Trevor Clark made seven saves.

“I thought they played well tonight,” Blazers coach Mario Waibel said via text of his defense. “They have adapted and matured faster than we thought they could, and it has been a game-changer for us. We knew we could score goals coming into the season, but [we] didn’t know if we were going to have to be in a bunch of shootouts. They are giving us more options.”

Sierra Canyon finally put the game away with a four-goal barrage in a two-minute span of the fourth quarter, fueled by Pistotnik’s make-it-take-it face-off dominance.