No. 11 Mira Costa Hands No. 12 Palisades its First Loss 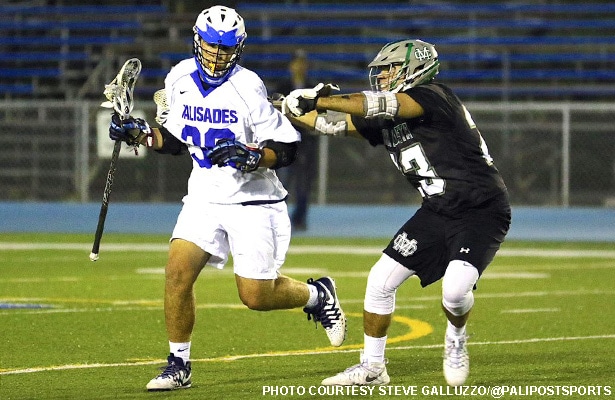 Senior Zane Crandall scored five goals in his first game of the season Wednesday, helping propel No. 11 Mira Costa to a 12-6 win over previously undefeated No. 12 Palisades. Crandall, who is committed to NCAA Division I Lafayette, missed the Mustangs’ first eight games with tendinitis in his knee.

But he wasted little time Wednesday, scoring Costa’s first two goals with the first few minutes of the game. By the end of the first quarter, Crandall had three goals, and the Mustangs led 4-2. They extended the lead to 6-3 at halftime but didn’t start to put the game away until Tyler Maruyama and Jonathan “JJ” Packer scored in the third period to make it 8-3 entering the fourth.

“I’m very happy we have an athletic team, however, we have to do a better job of executing an orchestrated offense if we are going to beat teams like [Palos Verdes], Redondo and Peninsula,” Costa coach Aaron Karsh said. “We had moments of brilliance and other moments where we rested on the fact that we are just better athletes than some of our opponents.”

While Mira Costa (6-3) struggled at times with the size of the Pali midfielders — due, in part, to the absence of co-captain Jack Gibbons, who was out with a sore back — the Mustangs never trailed. Goalie John Van Sickle had 13 saves and controlled the action around the net, turning a close game into one that never really felt in doubt.

In addition to Crandall’s five goals, Ryan Gustafson and Casey Bonner each had two goals for the Mustangs, and Zach Horowitz, Maruyama and Packer each scored one. It was only the second game all season in which Costa scored in double figures. The team still is without senior middie Hayden Frye, who also has a knee injury.

Macchio Rissone and Jake Takakjian each scored twice for Palisades (6-1), and Joey Hirschman and Cooper Lee scored one each.