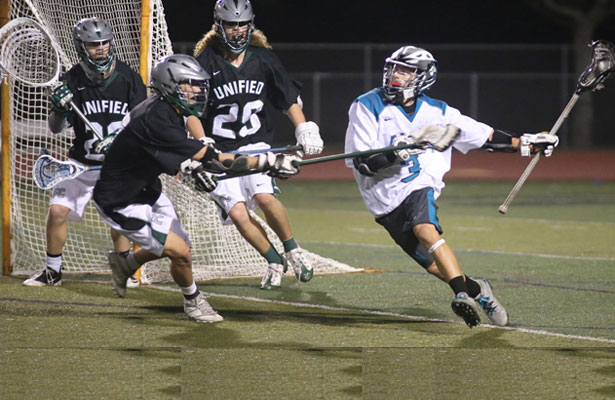 Half a decade ago, few in Orange County Lacrosse would have given much recognition to Aliso Niguel High School.   The Wolverines at that time were generally a 0.500 team who were on the outside looking in come playoff time.  Improving steadily each year, the Wolverines finished 2014 with a 15-3 record, a Sea View League title, a playoff berth, and widespread recognition that they are legit. Although the Wolverines did not get past the first round, they proved they can play with the big boys by going toe to toe with Great Oak in a 14-11 first round loss.  Just making the playoffs is no longer good enough, this group wants to advance.

The Wolverines move up to the South Coast League this year, and that means they will be tested during the regular season like never before.  Don’t be surprised if you see three more SCL teams in our pre-season Top 10.  That means six in-league games against potentially Top 10 teams in addition to other contenders like St. Margaret’s Episcopal School and Great Oak High School.  The Wolverines are eager to prove that they can compete at this level.

The Wolverines have one of the most dynamic and fun-to-watch players in the county in First Team All-County senior attackman Jonah Rinaldi.  Whether it’s North-South or East-West, Rinaldi is able to speed by most defenseman in the county, and he did it last year to the tune of over 100 points. He is a potent shooter, extremely creative in his offensive creation, and gritty and determined to get to the goal and make a play. Rinaldi uses his skills to play a fast and fun brand of lacrosse, very reminiscent of UNC’s 4 year starter Joey Sankey.

To score points, Rinaldi needs the ball and that is where Michael Marino (Colorado Mesa) comes in.  Marino has become one of the top faceoff specialists in Orange County. His ability to compete with the old guard of Ryan Harnisch of St. Margaret’s, CDM’s Jason Simaan, and Austin Babb of Foothill, will factor heavily into Aliso’s ability to advance deeper in the playoffs.   This will be no easy task, but if Marino is able to win draws, things will fall in favor of Aliso.

Only two seniors return on defense; defenseman Ben Rush  and goalie Austin Stahl.  While Rinaldi and Marino are marquee offensive threats, championships and glory is usually achieved through stout defensive play. Coach Jenkins is confident that his defense is up to the task “Offensively, we want to be one of the most efficient teams in the area, but how well we do in the South Coast League and this season generally, will depend on how well our defense can come together.” “It’s a big task, but our guys have been able to raise the bar every year, and are not afraid of the challenge,” according to Coach Jenkins.

Other players to watch this year are midfielders Garret Hoang and Matt Jones.

Coach Jenkins has also been doing work on the back end of things, hiring new coaches to solidify his program’s legitimacy. Headlining the hires is Eric Bassett, the new JV coach. Bassett played at Arizona and graduated in 1990.  While at Arizona he won scoring titles, Attackman of the Year honors, and Team MVP. He was the lone West Coast Representative in the North/South All Star game; a match held annually that showcases the best college players. Bassett has been coaching at the youth level, most recently leading the SoCal Black Knights U9 to an undefeated season. Bassett will no doubt become an integral part of the youth development that will lead to future success for the Wolverines.

No longer satisfied with just making the playoffs, the Wolverines are looking to join the County’s elite, and advance deep into the playoffs.  A challenging regular season schedule should have them ready for prime time come May.