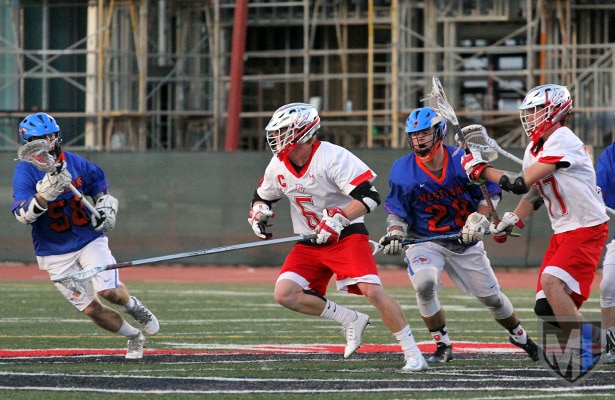 Despite being ranked No. 1 in the coaches poll, seeded No. 1 in the playoffs and riding an 18-game winning streak, Palos Verdes played Saturday night like it had something to prove. The Sea Kings were facing No. 4 Westlake, the only LA-area team to have beaten them this season, and PV wanted payback.

Palos Verdes (19-2) stifled Westlake to win their 19th consecutive game and advance to Wednesday’s US Lacrosse LA championship game for the third year in a row and fourth time in five years. The two-time defending LA champion Sea Kings will face No. 2 Loyola (18-4), which rallied to beat No. 3 Harvard Westlake 10-8 on Saturday.

As dominant as PV’s performance was in most phases, the final score easily could have been much worse. Credit for keeping the game within reach — it was 4-2 at halftime and only 7-2 after three quarters — lies with Westlake goalie Matt Kilkeary. The junior made an astounding 22 saves, 16 of them coming in the first three quarters.

But the Warriors’ offense could not solve the Palos Verdes defense. The Sea Kings caused 13 turnovers, collected 40 ground balls and goalie Connor Jongewaard made eight saves. Westlake (14-5) had been held to single digits only three times previously this season — once in a 9-8 win over Palos Verdes on March 7.

Sea Kings seniors Jarrett Jones and Peter Henkhaus missed that game with injuries, though, and Saturday they were eager to show Westlake what PV looks like with its full lineup. Jones finished with seven ground balls and one take-away, and Henkhaus scored midway through the fourth quarter to stretch the Palos Verdes lead to 8-2.

Senior Aidan Westley scored twice during a one-minute, nonreleasable Westlake penalty to all but ice the game at 10-2 with 2:42 to play.

Sophomore Duke Cohen scored both of Westlake’s goals, the first on a man-up feed from senior Brett Reilly in the first quarter and the second on a pass from junior Spencer Tyoran in the second quarter.

Westlake didn’t score in the second half, mostly because the Warriors spent nearly the entire 12 minutes on defense. Palos Verdes scored three times on 12 third-quarter shots, and Westlake’s Kilkeary made five saves. The Warriors took one shot in the period.