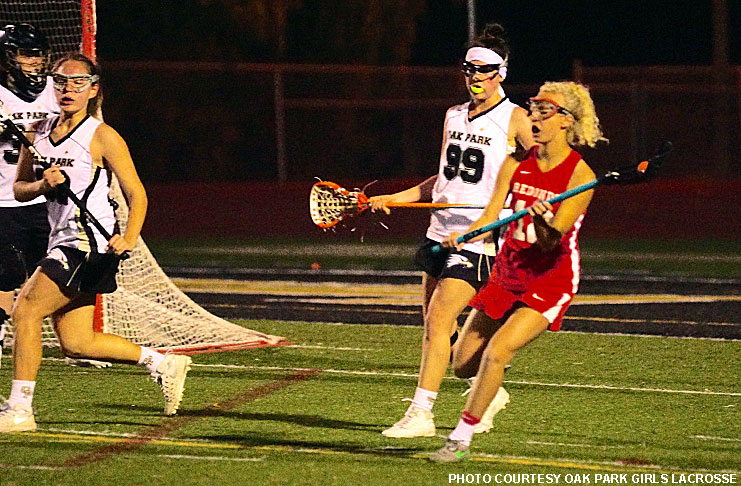 The Redondo Union bus to Oak Park was delayed in traffic an extra hour Thursday night, but the Sea Hawks arrived ready to play nonetheless. Top-ranked Redondo raced out to a 5-0 lead in the first 10 minutes, then held on tight at the end to win a tough, early-season matchup, 9-8.

Redondo has one of its youngest teams in years with seven new starters, including three sophomores and a freshman. While Oak Park’s defense was focusing on shutting down Alison Shafer, Redondo’s top midfielder, the younger Sea Hawks came through. Freshman Brooke Tokushige had three goals and an assist, and sophomore middie Addy Bass came up big with three goals and three ground balls. While the Eagles’ defense focused on keeping Shafer from scoring, she showed her all-around game with four assist and five ground balls. Sophomore attacker Emma Hodges was moved to the circle on draws and came up big with three ground balls for crucial possessions.

After the Sea Hawks ran off the bus and out to a 5-0 lead, Oak Park finally got on the board with an unassisted goal from Isabelle Campbell, who would finish with a game-high six goals. The Eagles pulled within 6-3 at halftime, and after the teams traded goals to make it 7-4, Oak Park rattled off three in a row — two from Cambell and one from Erin Dotson — in a seven-minute span to tie the score 7-7.

After spotting the Sea Hawks the five-goal lead, the Eagles’ defense stepped up and held Redondo to four goals over the next 34 minutes of play. That defense was led by goalie Alexis Robinson, with defenders Harper Wayne, Maddie Suwara, Courtney Mueting and Riley deVarennes all contributing strong play to the effort.

RU answered Oak Park’s rally, taking an 8-7 lead one minute after the Eagles’ tied it, but Oak Park came back two minutes later to tie it again at 8-8 with seven minutes left. After Redondo went up 9-8 with five minutes left, things got hectic. Transition play on both ends created a full-field, back-and-forth game that had the crowd standing.

Oak Park had three chances late to tie the game. A shot by Graesen Campbell went wide, and another from Campbell hit the cross bar. The last-ditch effort with 12 seconds left fell out of an Oak Park player’s stick during the shot and was scooped up Sea Hawks defender Lisa Diethelm, who ran out the final 10 seconds.

Although young on offense, the Redondo defense is a seasoned group with three seniors leading the way. Melanie Paiz starting in goal for the third year had eight saves, including two in the frantic closing minutes. Adrianna D’Agostino and Jackie Schneider (4 GBs) were solid on defense in crunch time. Junior defender Maddie Marcon had several outstanding long transition clearing runs, as did Diethelm.

Other contributors on offense were sophomore Sophie Ristorcelli (1g, 1a), and seniors Caleigh Ranjo (1g) and Sara Furutani (1g).

Redondo (2-0) travels to an Orange County tournament to play Tesoro and Laguna Hills, then faces another big challenge March 17 when it plays host to No. 4 Agoura. Next up for Oak Park is a home game Monday against No. 13 West Ranch.