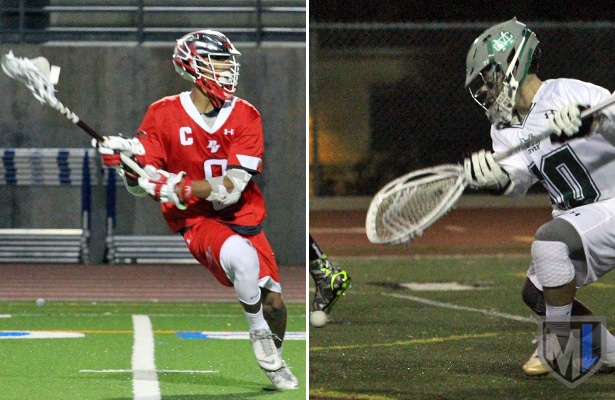 Seniors Rizal Smith (left) and Peter Henkhaus each scored two of their four goals in the first quarter, sparking No. 1 Palos Verdes to a quick 6-1 lead on No. 10 Mira Costa and goalie John Van Sickle (right), who reportedly was playing with a broken hand. The Sea Kings showed no sympathy, peppering the Costa goal in what became a 16-3 Bay League victory.

The score reached 12-2 by halftime and triggered a running clock at 14-2 before the third quarter expired.

Senior middie Zane Crandall scored all three goals for the Mustangs, who had won seven in a row and climbed back into the Top 10 after a slow start due to injuries to key players (including Crandall). Now with Van Sickle (Drexel) not 100 percent, it remains to be seen how Costa (11-4, 2-1) will fare with three Bay League games remaining.