No. 1 OP Girls Post Convincing Win Over No. 2 Chaminade 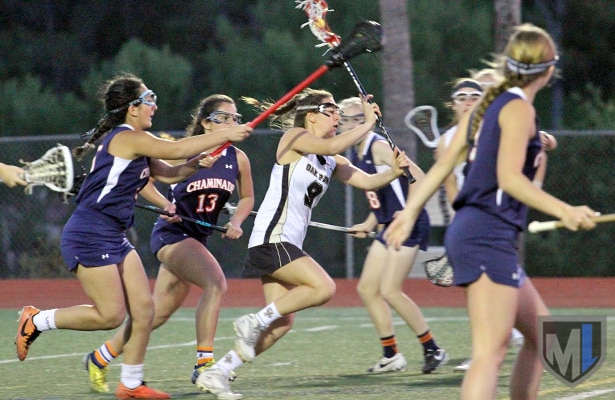 As matchups of No. 1 vs. No. 2 go, Wednesday’s clash between top-ranked Oak Park and visiting Chaminade was a tight one for the first 15 minutes. But Oak Park scored three quick goals to close out the first half and carried that momentum to a 13-4 victory, the Eagles’ seventh win by nine or more goals in their eight victories.

The victory was convincing, with Oak Park (8-0) winning at both ends of the field. Offensively, 11 of the Eagles’ 13 goals were assisted. Defensively, they held Chaminade senior Emma Dawson without a goal and limited the Eagles to only two goals until the score already had reached 12-2 and triggered a running clock.
Shayne Costello (3g, 4a), Morgan Shorts (4g, 1a) and Julia Gilliam (2g, 2a) led the Oak Park offense, but contributions came from everywhere. Ania Brown (2g, 1a), Ellie Strauch (1g, 1a), Lauren Duerfeldt (1g), Yael Kauffman (1a) and Emma Barrow (1a) all put points in the scorebook, as well.

As lopsided as it wound up, though, the Oak Park lead was only 3-2 with 6:32 to play in the first half. But a goal by Gilliam and transition scores from Duerfeldt and Brown made it 6-2, and the Eagles were off and running.

Oak Park opened the second half with disciplined half-field offense, scoring three times on set plays within the first five minutes — Brown to Strauch, then Gilliam to Costello, followed by Strauch to Costello. Suddenly it was 9-2. Costello and Shorts connected twice more to make it 11-2 before Chaminade had its first offensive possession.

That possession came up empty, and seconds later the Eagles pushed the score to 12-2 with a fast-break connection from goalie Alexis Robinson, to Lauren Welin to Barrow to Gilliam covering 90 yards in 16 seconds, with 16 minutes to play.

That triggered a running clock, and though Chaminade (5-2) managed to score and turn off the running clock, the damage was done. Oak Park’s defense created 18 turnovers in the game — six by Gilliam — and allowed only 14 shots. Goalies Meggie Sheehan (first half) and Robinson (second half) made five saves each.