No. 1 Loyola Falls to St. Ignatius in Closing Seconds 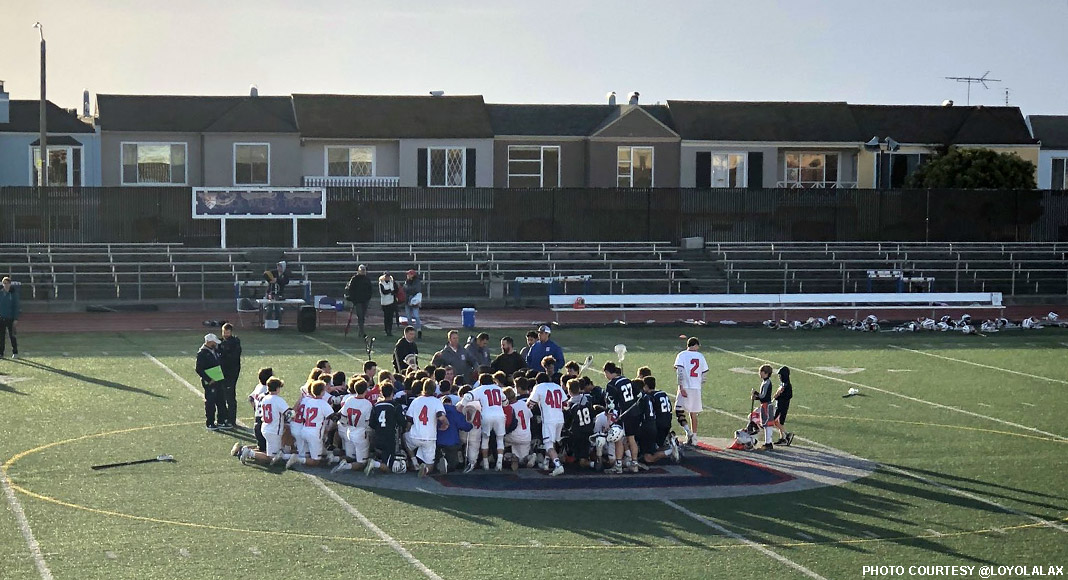 Top-ranked Loyola overcame a three-goal deficit in the fourth quarter to forge a tie Thursday, but host St. Ignatius-San Francisco, the No. 1 or No. 2 team in the Western Region in various rankings, scored with 13 seconds left to claim an 8-7 win.

St. Ignatius was ranked No. 1 in the preseason in the Nike/US Lacrosse West Top 10; Loyola was No. 6. The Under Armour/Inside Lacrosse Preseason Top 10 had St. Ignatius No. 2 behind San Diego’s Torrey Pines; Loyola was unranked.

Nevertheless, the teams played a very even first half, with St. Ignatius taking a 2-0 lead and Loyola coming back to tie on goals from Kaiser Fry and Robert Henderson midway through the first quarter. The teams traded goals the rest of the half and went into the break tied 4-4.

SI scored three times in the third quarter to take a 7-4 lead with 2:21 left in the period, but Loyola would not allow another goal for 13-plus minutes.

In the meantime, the Cubs came back. Senior Henry Hasenberg found junior Speed Fry up top to make it 7-5 a minute into the fourth quarter. Five minutes later, Wes Priestly found Kaiser Fry in the crease to make it 7-6. Two minutes after that, Hasenberg fed a cutting Alex Horowitz for the tying goal with 3:52 to play.

The score stayed that way until the closing seconds, when SI junior middie Mark Stephens (Harvard) scored the game-winner with 13 second left.

Horowitz and Kaiser Fry each scored two goals for Loyola, and Speed Fry, Henderson and Pat Casani each had one. Hasenberg recorded three assists, and Priestly had one. Goalie stats were unavailable, but Casey Vock of @3dRising highlighted the play of Loyola’s Will Parducci in cage.