No.1 Foothill Too Much for No.5 Edison 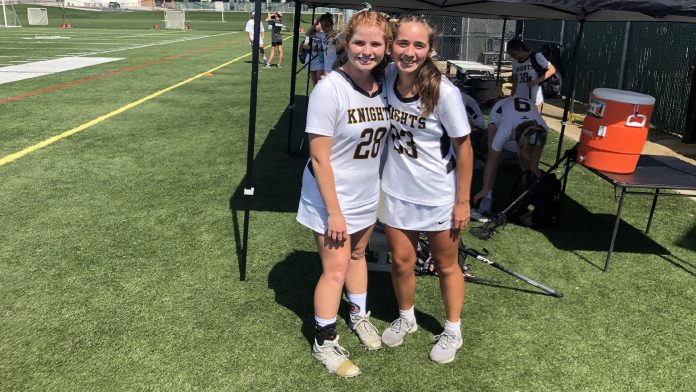 In a battle of two top five teams in the CIF-SS girls lacrosse polls, the No.1 Foothill girls lacrosse team remained undefeated, as it beat No.5 Edison 12-2 on Saturday at Foothill High School.

Delaney Healy (pictured left), Zoey Stephens (pictured right) and Taylor Puma led the way for the Knights with two goals each while Elena Torres, Simone Bibelot, Tatum Walshe, Mia Marchetti, Natalie Anderson and Courtney Copeland capped off a balanced scoring effort, as each found the back of the net once for Foothill, which got four saves from Mikayla Yang and some second half playing time for Kat Chavez.

“I think the most important thing for us was coming out and playing Foothill lacrosse at the beginning of the game. The past few games we’ve been coming out a little slow, letting the other team score first and I think the big thing for us was just making sure that defensively we came out hard on attack, we played smart and we’re goal hungry,” Knights coach Cristina Johnson said.

From the opening draw, the Knights were in no danger whatsoever, as they took a 9-0 lead going into halftime. The Chargers didn’t score until the 22:15 mark of the second half, and even when they could, they weren’t able to keep up with the Knights after their last goal at the 17:10 mark.

Bryant and Alyssa Hesse each had one goal for Edison while Cailen Gorsuch made seven saves. Gorsuch stepped up for the Chargers in the second half, as she made saves in the second half, which wound up being the fewest goals Foothill has scored at this point of the season.

“I think we started the game really really nervous. I think we came into the game with a lot of nerves about playing Foothill and so I don’t think we played our best lacrosse today,” Chargers coach Olivia Smart said.

Edison (7-5) returns to action and Sunset League play Thursday at Corona Del Mar at 3 p.m., but could also play at JSerra on Tuesday at 4:15 p.m. The Chargers are currently tied with Newport Harbor for first place in the Sunset League at 2-1, as the second half of league kicks off.

“I think all the mistakes we made are fixable,” Smart said. “I like how excited she [Gorsuch] is to learn. She works really really hard, she takes our criticism really really well and she wants to get better and she’s getting better and better with every game.”

The Knights (9-0) resume Crestview League action on Thursday in a home game against Canyon at 6 p.m. The Comanches are tied for first in league with Foothill and have wins over teams such as Edison and San Juan Hills.

“I think for us it’s going to be really important that we stay composed, that we come out with hot energy from the beginning and not allow them to get momentum,” Johnson said.