No. 1 Chaminade Holds Off No. 2 Oak Park 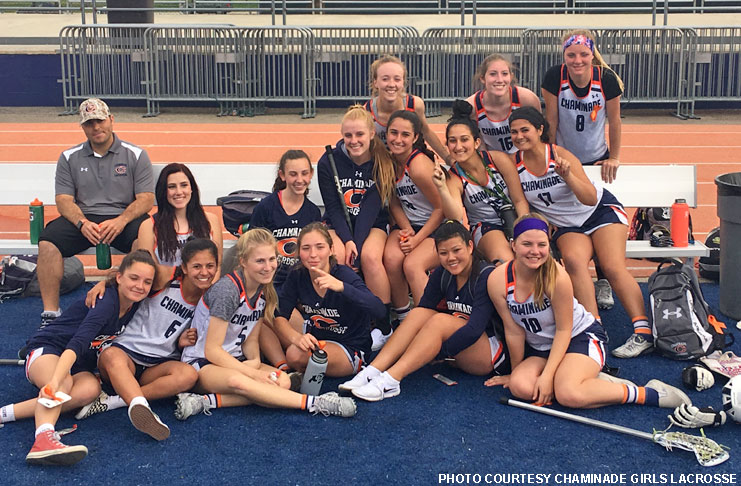 The top-ranked Chaminade girls cleared another big hurdle Friday night, holding off No. 2 Oak Park 8-6 at home to claim their 12th consecutive victory. The Eagles (12-1) haven’t lost since an 8-6 opening-game loss at Royal.

Chaminade now has wins over No. 2 Oak Park, No. 3 Redondo, No. 5 Agoura and two over No. 7 Birmingham. Much of the credit for that goes to the defense, which is allowing only 4.0 goals per game and hasn’t allowed more than six since that loss at Royal.

Friday, Oak Park (7-3) was in control early on, leading 4-2 late in the first half before Chaminade scored in the half’s closing seconds to pull within one at the break, 4-3.

The second half, though, belonged to Chaminade, which adjusted its offense and suddenly started finding holes in Oak Park’s pressure defense. The Eagles scored twice to take their first lead, but Oak Park answered right back, tying it 5-5.

Again Chaminade pulled ahead, leading 7-5 with about 12 minutes to play. A fast-break goal by Erin Dotson on a feed from Yael Kaufman again pulled Oak Park within one at 7-6, but Chaminade restored it’s two-goal lead with six minutes left.

That would be about it for the Oak Park offense, as Chaminade maintained possession for much of the next four minutes. When the Eagles did finally gain possession, they managed one shot. It was blocked, and Chaminade controlled the ball and ran out the final minute.

Both Chaminade and Oak Park face a stern test this week in San Diego Poway (12-1), which travels to face Chaminade on Wednesday and Oak Park on Friday.