NIne is Fine for Groeninger and St. Margaret’s 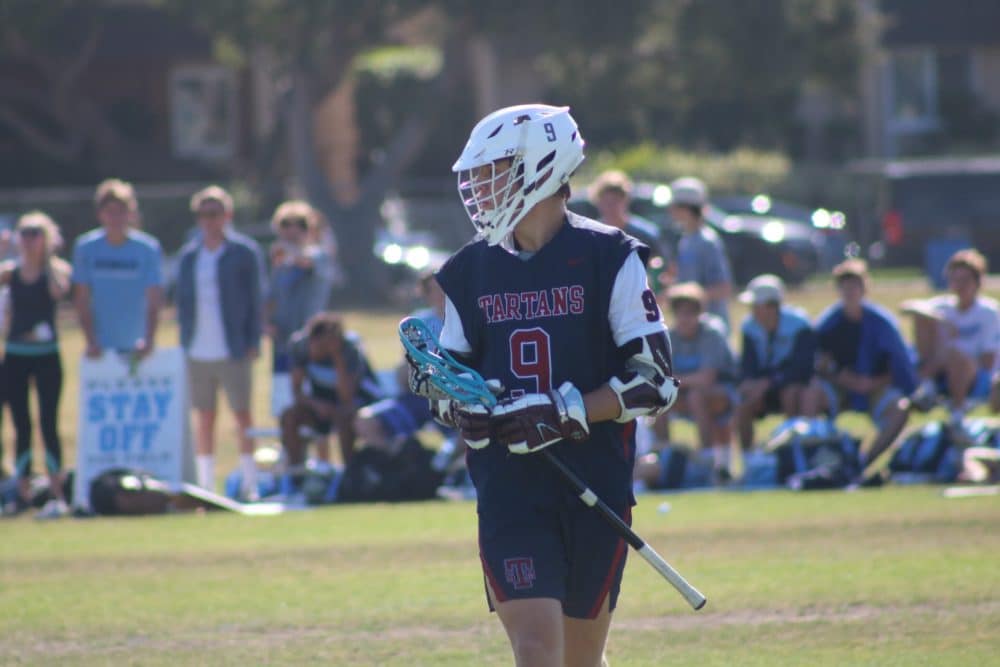 No. 9 is starting to make nine points routine.  For at least the third time in three weeks, Kevin Groeninger shot his uniform number with a nine-point outing on Wednesday. After torching Faith Lutheran (8 goals, 1 assist) on March 24 and terrorizing O’Dea (4g, 5a), Groeninger tormented CdM on Wednesday with five goals and four assists.

Needless to say, Groeninger provided a major boost to No. 1 St. Margarets‘ in their convincing 15-3 win over No. 7 Corona del Mar. The Tartans (13-0) continued their undefeated campaign with the win while the Sea Kings (6-7) brief two-game win streak was snapped with the defeat.

It was all St. Margarets throughout the entire game, who outscored the Sea Kings 3-0, 4-0, 4-2, and 4-1 in each of the four quarters, respectively. Tartans head coach Glen Miles was really proud of how his team played against a top 10 team.

“Very happy with the way we played today, the ball was moving pretty good,” Miles said. “Our defense did really well, our slide was good and we communicated really well. In general, I think the effort was solid across the board.”

Besides Groeninger’s stellar nine-point performance, the Tartans received offensive contributions from Andy Shin (4g, 1a), Garrett Kuntz (3g, 2a), Koa Todd (2g), and Conrad Hampson (1a). Zane Handy had an impressive afternoon in the cage with 11 saves and only three goals allowed.

“[St. Margarets] is tough to defend,” said Sea Kings head coach G.W. Mix. “They play at a high rate of speed and you have to be prepared for it all the time.”

Ball control was a major factor into the Tartans’ collecting 15 goals on 39 shot attempts as a team, and Stu Pollard played a major part in that winning 13 of 18 faceoffs at the dot.

Corona del Mar got their offense from Chandler Fincher (2g), Aidan Kelly (1g), Bobby Purcifull (1a), and Nick Meisenheimer (1a). The Sea Kings struggled picking up the ball with 19 total ground balls compared to the Tartans 38.

St. Margaret’s is playing the most difficult schedule in the Southern Section according to LaxPower, and things are not getting any easier. On deck for the Tartans as they look to retain Orange County’s top spot in the US Lacrosse coaches poll are matchup’s against Palos Verdes LA (9-3) Saturday, No. 2 Foothill (13-2) Tuesday, and a road match with Torrey Pines-San Diego (8-1) April 20.

The Sea Kings will look to get back in the win column on Saturday with a road match against No. 5 Trabuco Hills (9-2).