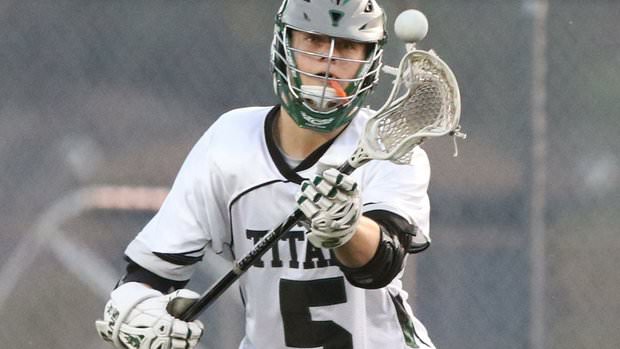 The #2 San Diego CIF ranked Poway Titans boarded a bus Monday to head north for their first extended road trip this season with their five game win streak at stake. The first stop on the Bay Area tour was San Ramon Valley High School, where they faced off against the Mustangs on Tuesday night.  Poway showed no ill-effects from the nine-hour ride, rolling to a 13-4 win over San Ramon Valley behind 5 goals from senior Brad Belasco (Westminster) and another 4 from senior Zach Hodge (Cleveland State).

After the Mustangs took an early lead, the Poway offense got it going, scoring the next four goals and ending the first quarter up 4-1.  SRV’s defense tightened up in the second quarter and forced several turnovers, scoring on a pair of unsettled goals to narrow the lead.  Belasco completed a first half hat trick but SRV had closed the gap to 5-3 by halftime.

Poway junior Nick Beeson (Bryant) found his rhythm in the 3rd quarter, scoring once and adding an assist to fellow junior Matt Letteri. Hodge netted his third goal of the night and the Titans ended the third quarter up 8-4.

The Titans (10-1) are now ranked #5 in the state and will continue their road trip on Friday night at San Francisco’s St. Ignatius, who holds the #2 ranking in California.