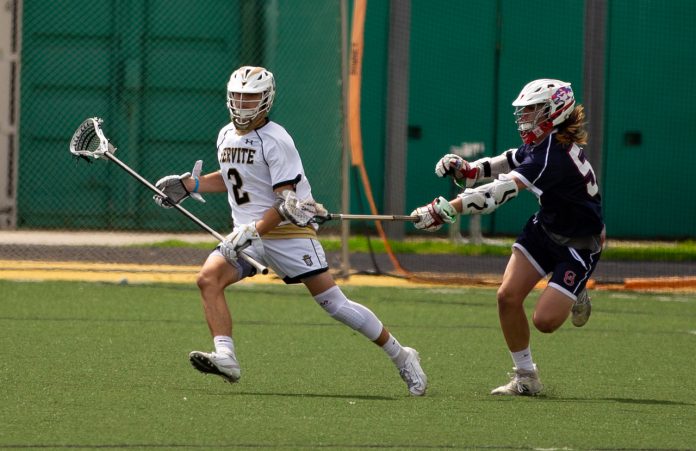 Servite senior defenseman Nick Sheremetta has committed to study and play NCAA Division 1 lacrosse at Bellarmine University in Louisville, Kentucky. The announcement was made last week.

“I choose to commit to Bellarmine because of how great of a job Coach [Andrew] Whitley and Coach [Nick] Marks did recruiting me. They made me feel like more than just the average player,” Sheremetta said.

Sheremetta said that Bellarmine’s accounting program, the campus atmosphere, and the Louisville lifestyle also factored heavily into his decision.

“Coach Whitley is really building something special down there in Louisville. Coach Whitley is one of those coaches that you would go to war for,” Sheremetta said. “When I visited Bellarmine I was blown away with how beautiful the campus was. Right in the suburbs of Louisville it is the perfect fit for me. I love to hunt and fish and being right there in Kentucky it is not too city and not too country.”

“Nick is a consummate competitor” O’Leary said on ServiteHS.org. “He joins a very short list of young men from this program that have been granted the opportunity to go play at the Division 1 level.  The skill set Nick possesses (both life and lacrosse related) are yielded from copious hours of personally challenging himself to achieve new goals. It is very apparent that Nick thrives in any process of self improvement, and is driven to work long before and after many others call it a day.

While his time here at Servite is limited to just a few months, his impact in the school, on our roster, and in our county will be immense.  I want to not only congratulate Nick and his parents, but Bellarmine University and Coach Whitley on gaining a great young man to help progress their program.”

A two-sport athlete who also played quarterback and wide receiver on the Friars football team, Sheremetta seemed to be getting overlooked by D1 coaches until recently. He credited Coach O’Leary, Assistant Coach Matt Prado, and Devin Arkison at Lockdown Recruiting for helping him hone his defensive skills and get the college looks that he deserved.

“Coach Devo’s Lockdown D has helped me target schools and contact coaches directly throughout this pandemic. His personal relationships with D1 coaches for sure opened more than one door for me, and I am so thankful for everything he has done for me,” Sheremetta said.

Sheremetta said that football also helped prepare him for the competitiveness of D1 lacrosse.

“Playing receiver at Servite has helped me become a faster and stronger player, but my biggest take away from football is work ethic. I have never been pushed so hard in my life and I wouldn’t be in the position I am today if I didn’t learn to work that hard,” Sheremetta said.

In addition to thanking Devo and O’Leary for all that they’ve done, Sheremetta thanked his parents who have helped him every step of the way.

“I want to thank my family for sacrificing so much and always believing in me. My parents work just about from sun up to sundown, and I wouldn’t be where I am and who I am today without them. My parents deserve so much credit, and I am so blessed to call them my mom and dad,” Sheremetta said.