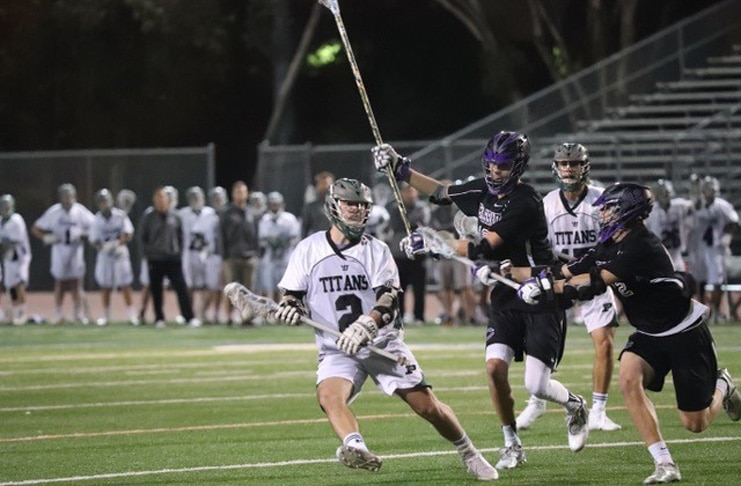 Nick Beeson set a new Poway single-game scoring record Tuesday, netting an incredible eight goals in Poway’s 18-6 victory over the Bishop’s School. With the win, Poway moves to 3-0, while this game puts the Knights at 1-1.

Fellow Titan Jack Woodard, already off to his own hot start with seven goals in Poway’s first two games, rang up seven assists against the Knights.

Poway senior Owen Springett (UMBC) started the scoring early in the first, putting the Titans ahead. Beeson (Bryant) then hit his first, and Poway quickly ran out to a 4-1 lead in the first quarter. The Knights would come back quickly, however; as middies Isaiah Dawson (Harvard) and Chase LaDrido (Johns Hopkins) pulled Bishop’s to within one, but Poway rattled off eight consecutive goals to end the half, effectively putting the game out of reach.

Beeson missed his first two shots in the first quarter before dialing it in and putting his next eight in the back of the net, with the last one being the record setter for the Titans.

Besides Beeson’s historic performance, perhaps the next biggest reason for the Titans big showing was the absolute dominance at the face-off X. Freshman Teagan Bultman won an astounding 21 of 22 face-offs, while sophomore Teague Morrissey won 3 of 5. Poway also collected 23 ground balls in the game, with Bultman and junior LSM Kobe Brown leading the way with four each.

The Bishop’s offense featured a few strong performances as well, with Dawson and LaDrido each scoring two goals and Garth Erdrossy adding one.

Poway will return home Friday night to take on St. Margaret’s out of Orange County, while Bishop’s will get back into action Thursday night at home against Rancho Bernardo.